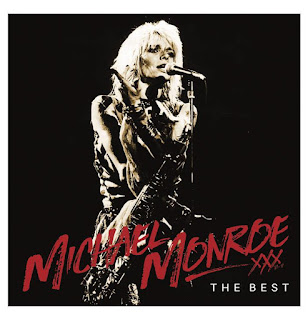 Think of the great frontmen. You don't have to like their music or the band (it helps), but they are undeniably captivating as they command a stage. Armed with great songs and a powerful band behind them, things can transcend. Names that come to mind: Iggy, Lux, HR, Keith Morris, Nick Cave, Freddie Mercury, Paul Stanley, Bowie, Jagger, (insert your favorite here), and Michael Monroe. Michael has been consistent if not anything else throughout his career. Rock & roll flows through him, and a sonic shockwave comes crashing out. My friend has said many times, "How can you not like a guy onstage singing rock & roll with a pink saxophone?" I completely agree. It has been stated many times by the band themselves that Guns & Roses exists because of Hanoi Rocks. If Hanoi was all Michael did, he would still be a legend. But fortunately he has been banging it out for 30 years past Hanoi, and this is a small slice of the fruits of those labors.

The Best is 29 songs total, including four previously unreleased tracks in addition to a new song called "One Foot Outta The Grave" with his current band lineup. The collection is very focused on Michael, so it is missing a few things. But those holes can be filled easily. What it doesn't have are any Hanoi Rocks songs from either period of the band. Sadly there are no songs from the one-off Jerusalem Slim project with Billy Idol foil Steve Stevens. It includes only two covers. Many of Michael's solo works include incredible covers from the Damned, Eddie & The Hot Rods, MC5, Leonard Cohen, Stooges, and many more. His interpretations are what you want - sometimes more faithful than others, but they are someone taking over the song and making it their own. Check out the Another Night In The Sun – Live In Helsinki release. That is a mix of covers and Hanoi songs, a great collection in its own right.

What The Best does have is a solid and perfect representation of Michael's solo work broken up over two discs. Disc 1 covers his first solo album from 1987's Nights Are So Long to 2003's Whatcha Want. It opens with one of the best statement songs money can buy, "Dead Jail Or Rock and Roll". It's as great as anything else that existed before or since. From '87-'03, Monroe released six albums and an EP. Every record is represented with the cream of the crop tracks from those releases. I'm sure the running time made some of the cuts difficult. But by and large, there is very little to complain about. His first period can be spotty because of the inconsistency of the players on the records. Michael can play everything, and I mean everything from guitar, vocals, and bass to his trademark harmonica and saxophone. It is at times stronger when he doesn't have to carry the entire weight of the album. Disc 1 also includes a tender duet with Stiv Bators, "It's A Lie". The song is a great tribute to his friend and great inspiration. The true meat are the four songs from 1994's Demolition 23, the only "band" type release included and the most songs from any one album of this time period. It's also the only record represented here that has been out of print since 1995. The band featured Sammy Yaffa and was produced by Little Steven. It is about as perfect of a project as Michael was ever able to put together post Hanoi. They had the sound, the songs, and a producer who was able to get the very best out of Michael and the band. "Nothin's Alright" & "Hammersmith Palais" are completely bulletproof, and it is sad that they have been buried this long and have not been covered by several bands since.

Disc 2 covers Michael's much more consistent current band. The unifying sound and very cohesive quality of this material covers only a six year period. There is nothing from 2002-2009 because that covers the Hanoi reboot that yielded three records with Andy McCoy. The band responsible for the tracks on disc 2 has been the main band Michael has been and is currently working with. From the beginning, Sammy Yaffa on bass, Karl Rockfist on drums, Steve Conte on guitar, and a revolving lead guitar spot that has been occupied by Ginger Wildheart, Dregen (Backyard Babies/Hellacopters), and currently Rich Jones (Black Halos). The pick of the Ginger tracks are represented here in the shape of "Trick Of The Wrist" & "'78". From the Dregen era, you get "Ballad Of The Lower East Side" & "Stained Glass Heart". 2015 happens: exit Dregen, enter Rich Jones, and you get a new injection of fresh blood and songs (very similar to the Demolition 23 stuff) like "Old Kings Road" & "Fist Fulla Dynamite". Included are four unreleased songs with Rich Jones and two closing covers. The first cover is an obscure song called "Get On" from the Finnish band Hurriganes (yes, that is spelled correctly). The original band is very Flamin' Groovies, and Michael's version just revs it up to Little Richard style madness. The closing track is his cover of "Magic Carpet Ride" by Steppenwolf,  featuring Slash. Originally released on the Coneheads soundtrack, this version is stronger and a bit rawer than what was released prior. Missing in action are guest vocal spots with Backyard Babies' "Rocker", his duet with Axl Rose on the Dead Boys' "Ain't It Fun", the benefit single "Pirates of the Baltic Sea", and bonus songs that were included on Japanese releases.

The Best is quite a slice to bite off and doesn't include any Hanoi Rocks material. Cleopatra has taken great care in properly re-releasing the early Hanoi catalogue in the box set Hanoi Rocks ‎– Strange Boys. It includes four studio albums and the incredible live from the Marquee club All Those Wasted Years. The final studio album Two Steps From The Move was re-released in 2015 by Rock Candy as a two-CD set.

Michael Monroe is a treasure to behold and a must explore for everyone. It is so very short-sighted to pin him as just a glam artist and say that what Hanoi Rocks were doing was the same as anyone else on the Sunset Strip. It was so much more rooted in rock & roll, punk, and early Alice Cooper. They were the perfect band that was tragically cut short when they were not yet 24 years old. Once all of the legal saber-rattling was done, Hanoi was asked if they would like to sue Vince Neil for the compensation of killing their bandmate. Unanimously the band said no. They felt that there was no price that they could accept that would be anything worth their friend's life. Because the band would not accept payment, Vince could not close the book on what he did and would have to live with the fact that he could not buy off the integrity of the band, therefore always knowing that they valued Razzle's life above money and the continuation of their band. That is why Michael Monroe has been great for over 30 years.