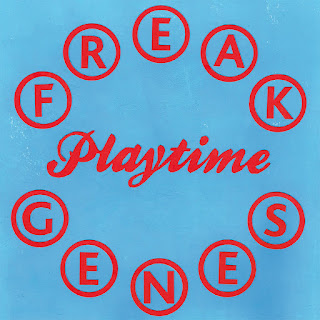 For me, the very best thing about writing about music is discovering a new band and falling in love almost instantly. I'm far from an authority on music, and I don't even attempt to write proper reviews. So really my for usual goal for this blog is to get so super-excited about a record that perhaps you'll be persuaded to give it a listen. Today's proverbial shouting from the rooftops concerns Freak Genes, who in less than three weeks have gone from a band I had never heard of to serious contenders for my album of the year honors.

Sure, I had some indication that I was going to dig Freak Genes before I had even heard a note. Co-conspirators Andrew Anderson (Proto Idiot, The Hipshakes) and Charlie Murphy (Red Cords) are guys I admire and respect for their existing contributions to the world of garage/punk. And Freak Genes' album Playtime has come out on Alien Snatch Records - probably my favorite label of all-time. But Playtime might not exactly be the album you're expecting from this pair. Basically these two decided to take all of the crazy, discarded ideas from their regular bands and make a whole new group out of them. The result is a brilliant fusion of new wave, pop, garage, and minimalist '77 U.K. punk. The beauty of this project is that there was no specific formula or rule book for what the songs needed to be. So you can have everything from Wire/Devo strangeness ("Let's Go Slow") to pure crackling punk ("Exposed") to jaunty psych pop ("Jekyll & Hyde") to new wave garage dance rock ("Going Through the Motions") to something that sounds like Ringo Starr cutting a '70s crossover country track ("Not Alright With Me") all on the same record. And yet everything fits together so splendidly. The album has this general vibe of quirky but really catchy, and these two prove to be remarkably good at writing that type of song. They've really caught fire as Freak Genes - churning out 16 songs here with another full album already in the can. Playtime is one of those albums that just flat-out delights me. It's consistently fun, distinctively British, and quite odd in an entirely good way. Really it all boils down to it just being a terrific album, anchored by standout tracks like the jagged & cheeky "Going Wrong", the poppy lead single "Mind The Gap", and the wonderfully weird "Still Disgusting". I suppose there's a chance that a song or two on here won't click for you. But at a total of 16 tracks, that still leaves you with more than enough gems. And with no song exceeding three minutes and the majority clocking in under two, this does not seem like a "long" album at all. I'm left wanting more - which is certainly a good thing with a second album soon to follow!