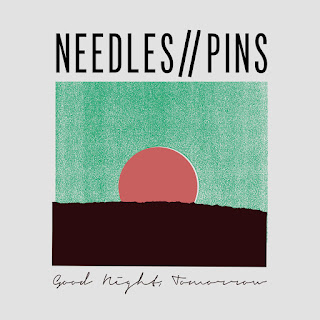 And the great albums of 2017 just keep on coming! It was three years ago that Needles//Pins released Shamebirds - in my book one of the definitive albums of modern-day powerpop/punk. Had the Vancouver trio followed it with a similar-sounding effort, I would surely have praised it. But for their third LP, Needles//Pins have given us something even better. Good Night, Tomorrow is an album defined not by genre but rather by the unique talent of the band. Not many punk bands can successfully navigate the move to a more "mature" sound. Some will outright fail. Others will do a credible job but still leave you craving their earlier recordings. But in collaboration with the outstanding producer Jesse Gander, Needles//Pins have delivered a sophisticated and stylistically varied third album that leaves the previous two in the dust. While I could probably identify a couple of songs from each of the previous albums that stood out to me, this one is chock full of brilliant tunes. There's still enough of the punk and power pop to satisfy the existing fan base. But this album is less about following a specific style and more about Adam Ess fully coming into his own as a songwriter. More than anything else, Good Night, Tomorrow is a set of songs chronicling the trials and tribulations of Adam's life in Vancouver.

Listening to Good Night, Tomorrow, one would have little trouble picking up on influences that have been identified as significant to this release. There's palpable Replacements worship coursing through "Violet" and "Back To The Bright", while "Miracle" could probably not exist in a world previously uninhabited by Jawbreaker. But I appreciate how seamlessly any new elements are worked into Needles//Pins' well-defined musical identity. This album represents a logical progression for the band, offering an appealing mix of fist-pumping anthems ("Good Night", "All The Same"), emotionally intense slow-burners ("Boil", "Tomorrow"), and impassioned punky pop sing-alongs ("Untitled [You're Fine]"). And then there's a song like "Pressure Points", which doesn't really sound like anything the band has done before (imagine, if you will, Leatherface meets The Smiths!). Adam's singing style is also considerably different on this album. His voice sounds way gruffer without even a hint of his previous nasal inflections. This rawer, weightier vocal style really fits the songs perfectly. With its running themes of insomnia, boredom, incessant rain, and the spiritual toll of making one's way in a large Pacific Northwestern city, this is by far the most "serious" Needles//Pins album yet. But that's a mood that the band wears remarkably well. Get Good Night, Tomorrow from Mint Records in Canada and Dirt Cult Records in the U.S.!