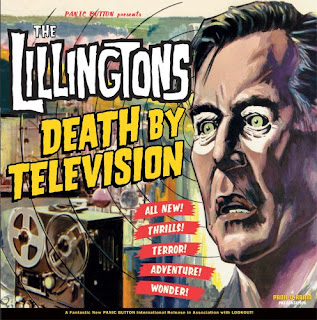 I was born in '64 in a northern English city and grew up listening to whatever chart fodder the radio deemed fit to play. This was back in the days before the internet provided easy access to music - even the UK music papers like Sounds, Melody Maker, and The New Musical Express still used quills on parchment. Then at age 13, I was introduced to a new type of music by one of the real cool kids in my class at school and my tastes changed overnight. For many years after that, if anyone was to ask me what my favourite album was, I'd either say The Clash's debut (or London Calling) or Stiff Little Fingers' Inflammable Material. Those seminal LPs are still pretty much perfect. But nowadays when I get asked that question, the answer is gonna be the album I'm reviewing today.

The Lillingtons are a pop punk band (as in proper old school pop punk, not the anodyne type that's so popular at the moment) from Newcastle, Wyoming who formed in 1995 and who despite long periods of inactivity are still around today (watch out for a new album later this year!!!). They released a debut album on Clearview Records in 1996 called Shit Out Of Luck. But it wasn't until three years later that they unleashed their piece de resistance, Death By Television. Produced by Mass Giorgini, it was released on March 30th, 1999 on the Ben Weasel/John Jughead owned Panic Button Records (Fat Wreck Chords wanted to release it but have had to wait almost 20 years to add The Lillingtons to their roster of acts. Fat Mike has said Death By Television is the best pop punk record of all time, and I ain't gonna argue with him). The lineup of the band has undergone several changes down the years, but on this album it featured ever present vocalist/guitarist Kody Templeman as well as bassist Cory Laurence and drummer Timmy V (Tim O'Hara).

The Lillingtons are often compared to the likes of The Ramones, Queers, and Screeching Weasel. But on Death By Television, they blow all their peers out of the water. The album is comprised of 14 (mostly) sci-fi themed classics. Cast your mind back to outlandish Saturday morning kids' TV shows, EC comics, '50s B movies...Think back to when you were a kid growing up desperately wanting the x ray spex that you saw advertised in your favourite comics ("lots of laughs and fun at parties"). Run and hide as the saucermen attack at lightning pace. Look up at the moon- there's an apeman up there having a bad day. There are so many fun things on there: aliens in flying silver discs that want to see us die, a crimefighting maggot that aspires to be a fly, plus songs about wanting to bang your head against the wall and the everyday horrors of a dead end job. It's not just the lyrical content that makes Death By Television so great. Lyrics would be nothing without a great backbeat, and the music on the album is pretty much perfect. Granted it doesn't deviate much from your typical Ramones-core low slung bass/guitar/drum template, but that's the beauty of it. It's simple, basic, and oh so effective. So many bands play this kind of music, but none do it as well as The Lillingtons.

Death By Television is just FUN FUN FUN. To paraphrase one of the songs, when I get up, you know I'm going to spend another 30 minutes with you. It never gets old; it never fails to thrill. The new album will be great. Whether it will come close to their masterpiece...that's virtually an impossible task, but fingers crossed!