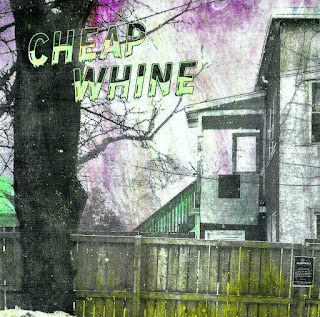 So when a Canadian powerpop/punk/garage supergroup makes a full-length debut on one of the best labels going, you can be sure I'm going to take notice! Cheap Whine features that veritable force of nature Steve Adamyk along with Eric French from Feral Trash and Jordy Bell from Crusades. The band's self-titled album, out on the U.K.'s Drunken Sailor Records, is a must-hear for all of you who dig garage punk by way of '70s punk and power pop. Of course this is totally my cup of tea. But what I appreciate about Cheap Whine is that it's not just the Steve Adamyk Band with a different name. Yeah, you're still getting fast & furious tempos, punchy guitars, and a truckload of catchy melodies. But overall, there's a much darker feel seeping into these songs. And there are some different things going on, like the cathartic raging vocals on "Unnoticed", the psychedelic thrashing of "Cut It Out", and the almost Weezer-ish appeal of "Withdrawl". This is really one of those albums that has something for everyone. The terrific "Kasumi" is powerpop/punk by the book, which is something that Adamyk does better than just about anyone. "Where Are You Now" and "All The While" might very well set your hair on fire, while the band's pure pop side comes out on the anthemic "Best Times" and the rousing closer "Letter To J".

I don't think Cheap Whine's debut album could be any more satisfying. It has the energy and the hooks that you would demand from any decent power pop/garage-punk hybrid, but the creative input from all three band members turns this into something a little different from all of these guys' other groups. When I first got the email from Drunken Sailor alerting me to this album's existence, I had a really good feeling off the bat. And I must say that Cheap Whine did not let me down. This album is an inspired effort and a splendid example of why I so thoroughly enjoy modern-day powerpop/punk. Canada does it again!

thanks for the heads up on this one!