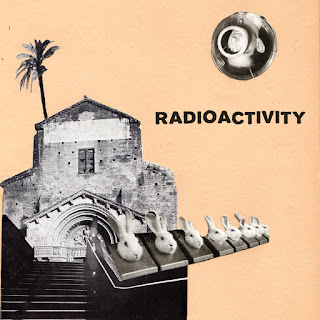 It goes without saying that you've got to have the new Radioactivity single. Jeff Burke (Marked Men, Potential Johns, Lost Balloons, The Novice, etc.) is as good of a songwriter as there is in the world of punk/powerpop. Out on Italy's Wild Honey Records, new single "Infected" is Radioactivity's first new music to be released since 2015. It features a pair of songs that were actually written before any of the tracks from Radioactivity's two LPs. And that's not because Burke discarded them, but rather because he didn't feel that they fit the tone of those albums. Both songs are vintage shots of Jeff Burke mid-tempo poppy punk. But when I say they're dark, I mean they're really dark. Consequently, they work perfectly as a pair. "Infected" is an A+ downer love song - so lyrically bitter yet pleasurably tuneful that it's impossible to not be reminded of the Buzzcocks' original run of brilliant singles. On the flip, "Sleep" is an ode to the fear of death written in the aftermath of the Japanese earthquake of 2011. It's heavy stuff lyrically, yet I find myself relating to Burke's words rather than being depressed by them. Plus the song is total pop, which is a very good thing in my book!

While the vibe of "Infected" is definitely a little different, I can't imagine any fan of Radioactivity not being absolutely thrilled with this single. These are two top-notch songs from one of the best bands out there. The release is limited to 1,000 vinyl copies, and you know they're gonna go fast!

4th killer entry in a row. here's hoping the next one continues the streak

Thanks, Mick! Got a little long-winded with today's post, so perhaps the streak is in jeopardy!