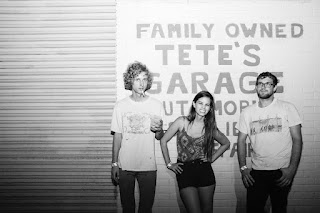 After all of these years of listening to and writing about punk rock, it's still a real kick for me to hear a new record that absolutely knocks my head off. There's just nothing better. Less than 20 seconds into Trampoline Team's new single "Drug Culture", I found myself exclaiming "YES!" at a volume completely inappropriate for indoor conversation. I am not one to argue about what is or is not punk rock. All I can tell you is that if someone came to me and asked, "What's punk rock?", I could very well just play them this single and be done with it. This is how you do it, man: pummeling buzz-saw guitars, a full-on fuck-you attitude, and a beat that compels furious head-bobbing. After getting totally floored by the A-side, I figured there had to be a slight drop-off with the B-side. Turns out the only thing dropping was my jaw. "I Don't Play Games" is every bit as good and could easily be mistaken for the "hit" if you didn't know any better. This single is a smasher! It sounds like it could have come out in the heyday of Rip Off Records or even the late '70s/early '80s. Buying it (or anything else) from Trampoline Team's Bandcamp will help fund the band's upcoming tour of Europe. For information on how to procure a physical copy, hit up the band on Facebook!

definitely one that'll be a best of 2017 contender