Pack Rat - Glad To Be Forgotten 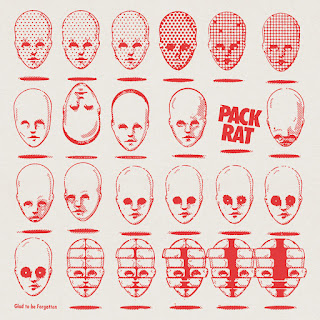 Pack Rat is the one-man project of Pat McEachnie -- drummer for the late, great Corner Boys and current hardcore heavyweights Chain Whip. Like almost every other person in the world, he found himself with some downtime last year. So he bought a guitar and proceeded to write and record a full-length album all by himself. Out now on Drunken Sailor Records, Glad To Be Forgotten is not quite as "pop" as Corner Boys or as hardcore as Chain Whip. But it certainly shows the influence of both bands as McEachnie tears through 10 tracks of frantic, super-snotty punk rock accompanied by earsplitting low-budget synthesizers. For a first attempt at fronting a band (in this case, a one-man band!), this is a remarkably good effort that should appeal to fans of the Killed By Death aesthetic. Vocally, McEachnie sounds like he's on the cusp of madness on most of these tracks (Who wasn't in 2020?). Glad To Be Forgotten, which ought to have you shouting along in delight and/or pogoing around the house, is anything but forgettable. Vinyl won't ship until next month, but pre-orders are open now. Hop on it!