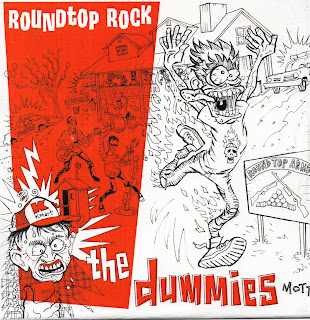 I generally don't write about a release if I can't provide you all with clear information on how to purchase it. That's kind of the point of this blog, right? I write about music, and if you dig it you can click a link and go buy it. But I must make an exception for a new split 7" released by the legendary Swedish garage punk label Ken Rock Records. This single features "new vintage" early '90s cuts from The Dummies and Gargoyles. The Dummies (1990-96) were Pennsylvania's greatest garage punk band before their relocation to New York. They released music on some of the top punk rock labels of the day such as Get Hip, Bag of Hammers, and Empty Records. In Central Pennsylvania, they remain the stuff of legend. Gargoyles (1989-95) hailed from San Francisco and were at the forefront of the '90s revival of '77 punk rock and roll. They had several releases on the iconic Sympathy For The Record Industry. Lead singer Tim Storm went on to be in the very excellent Reclusives. Somehow Ken Rock has managed to unearth a pair of lost gems from both of these fabled bands. Seriously, these are both primo tunes! Gargoyles' "5 Million Years To Earth" could almost pass for an outtake from Raw Power. This is OG action rock! The Dummies' "Roundtop Rock" is a furious blast of trashed-out degenerate rock and roll that ranks up there with the band's most essential songs. The Cliff Mott cover art, set at the The Dummies' old home base in Lewisberry (a former gun shop), depicts a true life incident involving excessive drinking and an inflatable raft being set on fire. For the legal protection of everyone involved, I will say no more. Longtime fans will be delighted to hear this track. And if The Dummies were before your time, "Roundtop Rock" is as good of an introduction as any! Unfortunately, I do not possess any ordering information for this record at the moment. Ken Rock strangely has no Internet presence at all: no web site, no social media, and no web store. But if you should happen to encounter this split release while perusing a record store, you should definitely buy it! In the meantime, you can purchase The Dummies' one and only LP from the Get Hip Recordings Bandcamp. And be sure to like Gargoyles' Facebook page! Happy hunting, folks. Additional info will be provided as it becomes available!
-L.R.
https://www.facebook.com/Gargoyles-SF-921654841353596/
Posted by Lord Rutledge at 12:25 PM

Thank you, Lord, for the positive review. You must be a PA insider to have the details around how the dummies title track came to be!

I am the only one in the States who is selling this record. You can either buy it through my listing on discogs, or email me at mark.henry@gmail.com as I am doing recently pressed t-shirt combo deals.