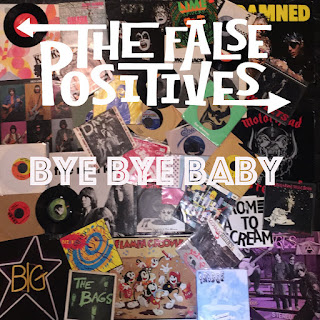 I previously identified The False Positives as a New York based band with a "Boston" type sound. Well now the band has established Boston as its home base, and singer/guitarist Dave Harrison finds himself reunited with Voodoo Dolls drummer Bruce Pierce! Harrison calls this the "new version of False Positives 2.0", and new single "Bye Bye Baby" finds the band continuing to live in the territory where garage rock, power pop, and straight-ahead rock and roll intersect. Produced and recorded by Pierce at American Bull Studios, this is the ninth False Positives single (and first to be recorded in Massachusetts). It's a catchy little breakup song that's a whole lot of fun to sing along with. Like all of The False Positives singles, it's available from all the usual streaming sites and is a name your price download from Bandcamp. Best believing!
-L.R.
https://thefalsepositives.bandcamp.com/track/bye-bye-baby
https://www.facebook.com/falsepositivesband
https://www.instagram.com/the_false_positives/
https://www.youtube.com/channel/UCLwR91I_FN_UheJV1oZSU_Q
Posted by Lord Rutledge at 7:54 AM