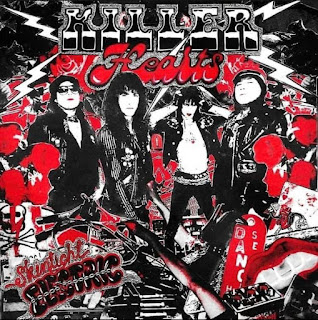 Out on Spaghetty Town and Dragstrip Riot Records and also sponsored by the Rock N Roll Manifesto, Skintight Electric is an absolute ripper of a debut album from Bayou City, Texas based punk rock and rollers Killer Hearts. It has been a couple of years since Killer Hearts exploded onto the scene with their fantastic self-titled debut 7". And while Skintight Electric reprises a couple of tracks from that release, it finds the band going all-out to sound bigger and better than ever. At its core, this is a quintessential high energy glam-punk rock and roll record. But Killer Hearts aren't above layering on a sick amount of bells and whistles (keyboards, handclaps, backing vocals, extra percussion). And it works! Producer Don "Demon Boy" Cilurso (Texas Terri and the Stiff Ones) doesn't hold back on imbuing this album with a pronounced '70s arena rock swagger. Landing on the rock side of the New York Dolls, Johnny Thunders, and Dead Boys, Skintight Electric is an over the top affair in the best way possible. It's loud, wild, and a whole lot of fun. The marriage of sleazy '70s punk and ripping rock and roll is hardly new territory, but Killer Hearts pull off this sound as splendidly as any band has in recent years. Of course these guys have the attitude and the look down pat. More importantly, they've got serious chops and (no pun intended) killer tunes. The Rock N Roll Manifesto version of this release is extremely limited, so move fast if you're interested!
-L.R.
https://killerhearts.bandcamp.com/album/skintight-electric-lp
https://www.facebook.com/officialkillerhearts
https://dragstripriotrecords.bandcamp.com/merch/killer-hearts-skintight-electric-lp
https://rnrmanifesto.bandcamp.com/album/skintight-electric
https://rnrmanifesto.bandcamp.com/album/skintight-electric
https://www.facebook.com/SpaghettyTown/
Posted by Lord Rutledge at 2:24 PM