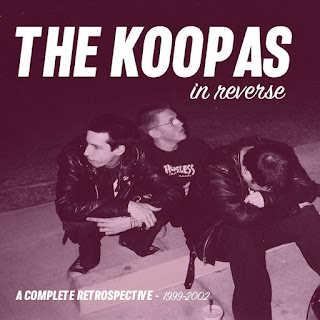 The Koopas are cherished in pop-punk circles as the best band that was almost on Mutant Pop Records (twice). Now -- nearly two decades after their untimely demise -- they have the distinction of being simultaneously released by the two greatest present-day American pop-punk record labels. A joint venture between Mom's Basement Records and Something To Do Records, The Koopas' In Reverse compiles every track this southeastern Texas trio released in its short run of existence -- plus 11 more that it didn't!

Coming in at a total of 27 tracks (all meticulously remastered at Mindrocket Recording Studio by John Roman), this collection serves as a wonderful time capsule of a late '90s/early 2000s pop-punk scene that I still hold closely to my heart. In 2001 when The Koopas came on my radar, my interest in pop-punk had shifted from the "bigger" bands of the scene to the newer ones that were self-releasing music or working with smaller labels. The Koopas, by necessity, ended up self-releasing their 7" When Opposites Attack on their own small label, Top Five Records. That release was my introduction to the band (to this day, I feel like a poser Koopas fan for not being on board from the Sex, Lies, and Videogames days). I took to the band immediately. They sounded like the lovechild of Screeching Weasel and the Mr. T. Experience. I dug that they weren't afraid to write sappy love songs. I dug that they were into High Fidelity. I dug that they were fans of the serial comma. But mostly, I dug that they were clearly on the pop side of pop-punk -- so much so that the singer/guitarist called himself Poppy Robbie (How different would The Koopas have been if they'd been fronted by Punky Robbie?). In print, I heralded the band as a sign of renewed life in American pop-punk and declared that they combined the musical chops of Rocket To Russia-era Ramones with the soul of the Modern Lovers. Sadly, the band would not last even another year. A follow-up to When Opposites Attack called New Wave of an Old Sound was recorded in early 2002 but ultimately went unreleased after Mutant Pop Records went on hiatus. The Koopas took their place in the "Remember them? They were so good!" annals of pop-punk history. Charlie and Tron continued in their other band Joe Jitsu and later Breaklights. Robbie became a solo recording artist and a pop artist. And in my mind, I always associated The Koopas with how much fun it was to be into pop-punk during those early Millennium years.

Over the years, I've often wondered: Were The Koopas really a good band, or was I just crazy? The Mom's Basement/Something To Do seal of approval seems to settle the former question, while the latter is still up for debate. John at Mom's Basement and Matthew at Something To Do know good pop-punk. If they're putting their butts (and money) on the line to release In Reverse, you know it's an essential release for any fan of Lookout!/Mutant Pop era pop-punk. The band itself had originally prepared this collection as a homemade CD-R to distribute to friends, family, and musically inclined adversaries. Tim at Mutant Pop helped spread the word by adding it to his mail order catalog. And now here we are: In Reverse exists on glorious compact disc. As promised, it documents this short-lived band's recorded output in reverse order. It begins with the never-released, should-have-been smash hit New Wave of an Old Sound, moves into the beloved When Opposites Attack, and concludes with the rawer Sex, Lies, and Videogames. In between, you'll find studio outtakes and other choice unreleased recordings. Tracks like "Miami To Malibu" and "Milkshakes and You" make me grateful that the New Wave of an Old Sound recordings have been rescued from the dustbin of history. Although they date back nearly 20 years, they sound very much in line with Mom's Basement's current roster of pop-punk and Ramonescore standouts. "Math of Love" manages to sum up the entire genre of pop-punk in under 30 seconds. "Those Three Little Words" and "Shut Up" hold up as classics of their time. "Let Me Go (Before You Fade Away)" offers a hint of the future greatness that was in store for the artist formerly known as Charmin' Charlie. A cover of "Maybe Baby" honors the true granddaddy of three-chord pop.

I'll say about In Reverse what I've said about numerous other releases: you'll hate it if you hate pop-punk, but you'll love it if you love pop-punk. And if you've already read 779 words about The Koopas, there's no way you hate pop-punk! You can order the CD here for just ten bucks. Digital version is available directly from the band for $8. I would say that those are '90s prices, but you would actually have paid way more back then. Be the first person on your block to jam to "Koopa Troopa Beach" on Discman!

You're the best, Josh! Thank you so much!