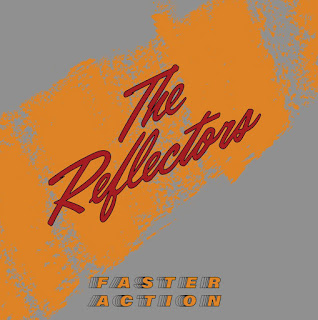 Now here's an album I was eagerly awaiting! Last year, The Reflectors released First Impression - one of the best albums of 2020 and one of the best power pop releases of recent memory. James, Nick, Ryan, and Johnny are now back with their sophomore long player Faster Action. The album is being co-released by Beluga Records in Sweden, Time For Action Records in Germany, and SNAP!! Records in Spain. It officially releases one week from today, but it's already available in digital form from the SNAP!! Records Bandcamp. Faster Action is a real fan-pleaser, sticking to the formula that worked so well on First Impression. If you like classic L.A. power pop or Buzzcocks-style punk-pop, well The Reflectors are the best of both worlds! Again the band worked with engineer/producer extraordinaire Jonny Bell to create an amazing-sounding power pop record that's chock full of hits. Quite a few of these songs were featured on The Reflectors' KXLU live broadcast, and the studio versions do not disappoint. Ralph Rivera has proclaimed "Radio Signals" the "best power pop song in forever", and he's not wrong! This album strikes a great balance between perfect pop songs like "Can't Sleep Tonight" & "Dial Tone" and punchier, punkier tunes like "Messin' Around" and the title track. And in typical Reflectors fashion, the album seems to finish even stronger than it starts. There's no filler to be found here, my friends!
Coming off the magnificence of First Impression, The Reflectors could not have been blamed for succumbing to the sophomore jinx. But instead, they've come through with the best album of 2021 so far. Check the links below for ordering info. No joke: the TFA vinyl version actually plays inside-out!
-L.R.
https://snaprecordsspain.bandcamp.com/album/the-reflectors-faster-action-funlp-040-funcd-069
https://reflectors.bandcamp.com/
https://belugarecords.bandcamp.com/album/the-reflectors-faster-action
https://www.belugarecords.com/products/refectors-faster-action?variant=40504523129011
https://www.timeforaction.de/shop/the-reflectors/faster-action/
https://www.facebook.com/thereflectorslosangeles
https://www.facebook.com/Time-For-Action-Records-299324823433736/
https://www.facebook.com/SnapRecordSpain/
https://www.facebook.com/punkrecords.se/
Posted by Lord Rutledge at 2:05 PM