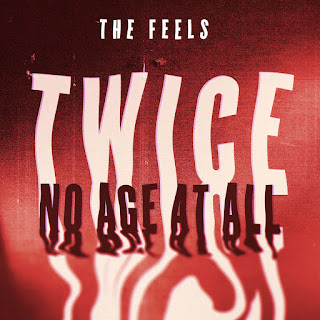 This is the fourth occasion on which I've had the pleasure to write about The Feels. As a huge fan of Christian's previous band The Tattle Tales, I was naturally enthused to hear he had created a one-man band back in 2016. But as much as I love all of those old Tattle Tales recordings, it's become clear to me that The Feels are way better. Christian is an even better songwriter now than he was 10-15 years ago, and with a solo project he has the freedom to explore any style of music he wishes without having to worry about how it "fits" the band. His recent single "She's Probably Not Thinkin' Of Me" was a perfect power pop track and one of my most highly rated singles of 2020. Now he's come out with a new single "Twice (No Age At All)" that absolutely blew me away. Christian is a pop guy through and through, but on this track he fully embraces the rock! The guitars and vocal phrasing bring to mind the louder side of '90s alternative rock. From the production to the musicianship (oh man, that solo!) to the vocals to the melodies, everything about this song is stellar. Christian's lyrics are exceptional and featured prominently in the song's music video created by Jess Tapia. Yes, this song is dark. But much of our greatest art does come from a place of pain. If you dig this track and have yet to hear the The Feels' brilliant full-length Dead Skin, I highly recommend that album! I had the privilege of interviewing Christian on the latest episode of Born Too Late -- the podcast I recently started with Jay Castro. Check it out if you're interested in a thoughtful conversation on life and pop music!
-L.R.
https://igotthefeels.bandcamp.com/
Posted by Lord Rutledge at 7:49 AM

Email ThisBlogThis!Share to TwitterShare to FacebookShare to Pinterest
Labels: Pop, The Feels