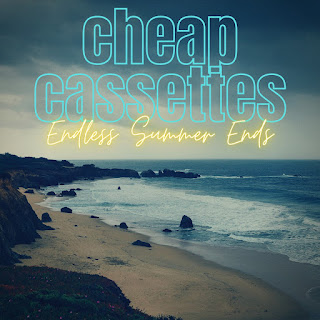 Well here we are on the last day of summer 2021. Just thinking of that gives me a tinge of melancholy. I feel as if another summer has slipped by without me making the most of it. Being the clever cats that they are, The Cheap Cassettes timed the release of their new single & music video "Endless Summer Ends" to coincide with this very occasion. "Endless Summer Ends", the Seattle trio's first new song in nearly two years, is a teaser for the band's forthcoming album Ever Since Ever Since. Suitably, "Endless Summer Ends" captures the wistful vibes of end of summer reflections. It's a thoughtful, mellow pop song that saunters past the four-minute mark without wearing out its welcome. As you would expect from The Cheap Cassettes, this is a quintessential power pop tune. That hook just might stay stuck in my head until next summer rolls around! The Cheap Cassettes are part of my holy trinity of favorite bands, and I would surely give them a glowing review even if they covered "Achy Breaky Heart" with kazoos. But I've got to say that they've really delivered something truly special with "Endless Summer Ends". This is music with heart, grounded in timeless melody. And the video, filmed & edited by Anna Parkhurst, is absolutely fantastic. Look for Ever Since Ever Since releasing on Rum Bar Records this December!
-L.R.
https://cheapcassettes.bandcamp.com/album/endless-summer-ends-new-single
https://www.facebook.com/cheapcassettes/
Posted by Lord Rutledge at 11:01 AM