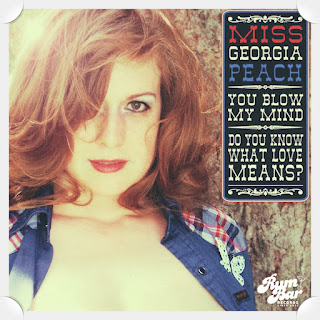 I've got some good stuff for you today! Back in August, I mentioned that Miss Georgia Peach had a new solo album in the works. The good news is that the album has been completed and is slated for release on Rum Bar Records. It's gonna be a country record, and I'm so pumped to hear it! Georgia and her total babe husband Travis Ramin recorded the album with Blaine Cartwright and Ruyter Suys from Nashville Pussy. With Mark and Scott from Nine Pound Hammer also featured on this release, it's no exaggeration to say that MGP has assembled a supergroup! In advance of the album, "You Blow My Mind" b​/​w "Do You Know What Love Means?" has been released as a teaser single. Both of these tracks are in right in my '60s/'70s sweet spot of classic country music. The latter, an exuberant sing-along, was previously featured on Rum Bar's XOXOXO Volume One compilation CD. The former, a rollicking & punkified duet with Cartwright, justifies your chosen purchase price even if you already own the comp. MGP is not just one of the greatest voices in contemporary music -- she's also one of the most versatile. Whether she's singing garage rock, heavy punk rock and roll, or old school country, Georgia is always a force to be reckoned with. If these teaser tracks are any indication, the full album is gonna be hot!
-L.R.
https://rumbarrecords.bandcamp.com/album/you-blow-my-mind-b-w-do-you-know-what-love-means
https://www.facebook.com/RumBarRecords
Posted by Lord Rutledge at 10:57 AM