The New Brutarians - "Barter Baby (I'll Trade You My Heart)" 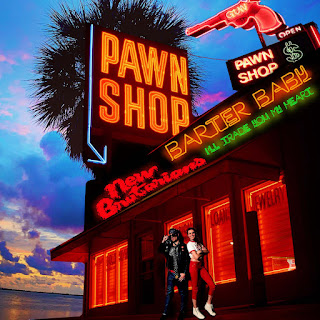 2021 has been the year of delayed records. The pressing plants are so bogged down that albums recorded now just might see the light of day before a human lands on Mars. The New Brutarians, a band I'm quite fond of, must now wait until spring of next year for their debut album Hysteria to come out. Some bands will just say, "Screw it!" and release the music on other formats. But The New Brutarians seem poised to wait this one out for another half year or so. In the meantime, Adam and Christina have turned loose an outtake from the Hysteria sessions called "Barter Baby (I'll Trade You My Heart)" . This track kind of channels the Rolling Stones by way of the Velvet Underground -- or maybe it's the other way around? As always, I dig the lo-fi glam/proto-punk vibe. Lyrics are always a highlight of an Adam T. composition, and they're absolutely brilliant on this track. I got through one verse and was like, "Man, I wish I could write like that!". While "Barter Baby" didn't make it onto the album, it's no throwaway. The song is a staple of the band's live set and would probably have been released as a single at some point. Enjoy it now, and look forward to Hysteria next year!
-L.R.
https://thenewbrutarians.bandcamp.com/track/barter-baby-ill-trade-you-my-heart
https://www.facebook.com/thenewbrutarians
https://www.instagram.com/thenewbrutarians/
Posted by Lord Rutledge at 8:17 AM