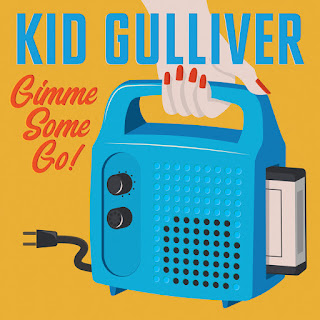 Following its amazing run of singles in 2020-21, Kid Gulliver has finally given us a bigger taste of its musical talents. The Boston-based pop group has released a four-song EP called Gimme Some Go! on Red On Red Records. What I like about this release is that it shows multiple sides of Kid Gulliver. It leads with a cover of the Bee Gees' classic "I Started A Joke". It's pretty ballsy to take on a song as perfect as "I Started A Joke", and I have to hand it to Kid Gulliver here. Rather than try to top the original (impossible!), the band chose to completely transform it. If you were not aware of the Bee Gees version, you could easily mistake this for a Kid Gulliver original! It's got a new wave/power pop feel to it, and Simone Berk's approach to the lead vocal is unexpected in the most wonderful way. This, my friends, is how you do a cover song! The video for the song (embedded below) is a real hoot. It's a throwback to all of those old school "performance clip" music videos, and there's a very special guest star appearing on bass!

Having set such a high bar for the rest of the EP, Kid Gulliver follows through with three excellent original songs. The haunting "Lila Dreams" brings to mind early '80s U.K. indie rock and weaves a sad tale of quiet despair. The interplay between David Armillotti's guitar and Lee Harrington's bass on this track is nothing short of stunning. "Gimme Some Go!" is the real surprise of this release. Who knew Kid Gulliver could do ska --  and do it well?! To close out the EP, "Stupid Little Girl" is a jangly power pop number that you might describe as "vintage" Kid Gulliver. Let it be said that the world can always use more pop songs which illuminate the imprudence of falling in love with a serial killer. Being a particular fan of well-crafted dark humor, I find myself in awe of Armillotti's lyrics and Berk's matter-of-fact treatment of them. In a just world, this song would be all over the radio!

I must concur with Ralph Rivera -- Kid Gulliver somehow manages to get better with every new release! Gimme Some Go! is full of pleasant surprises and truly splendid songs. Armillotti and Berk as a songwriting and vocal tandem are on some kind of roll. More, please!