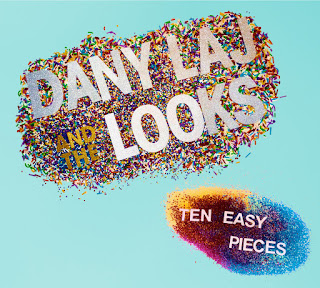 Ten Easy Pieces, the fourth album by Sudbury, Ontario's Dany Laj and The Looks, has been a fixture in my car CD player for a couple of weeks now. While it's most definitely an album for all seasons, Ten Easy Pieces is the perfect summertime rock and roll record. It's well documented that I was a big fan of the band's previous two albums Everything New Is New Again and Alive & Kicking. But with zero hesitation, I'll say that Ten Easy Pieces is the best album yet from Dany Laj and The Looks. With the previous albums, there were obvious "hits" that stood out. This time through, it's hard to pick a standout track since they're all so good. And the feel of this album is a little different as well. While it certainly has its serious, more melancholic moments, the overall vibe is joyful, energetic, and just plain fun. This is music that puts a smile on my face!
It's hardly surprising that Ten Easy Pieces is such a strong collection of songs. In advance of this album, Laj spent two years writing new songs and rearranging old ones. Some of these songs date all the way back to the early 2000s. 38 songs were eventually paired down to 12, and there's not a single sub-par track in the bunch. On this release, the band functions as a trio with drummer Dusty Campbell joining Laj and his musical and life partner Jeanette Dowling. The album also features appearances by Laj's pals Paul Loewenberg (keyboards), Greg Mihajic (harmonica and keyboards), Dunstan Topp (drums), and Zack Tymchuck (percussion). Ten Easy Pieces is a fine example of the musical appeal of Dany Laj and The Looks. The punk and power pop elements remain, mixed seamlessly with influences ranging from '60s pop to garage rock to indie rock to straight-forward rock and roll. "Smile", which channels the Beatles via early Elvis Costello, is an infectious opener that sets the tone for the entire album. "You & Me", the album's most recent single, is so catchy that it ought to come with a government warning. If "Don't Keep Me Guessin'" doesn't have you up and dancing within 30 seconds, there may be no hope for you. "Pick It Up" and "I Play Guitar" are every bit as rockin' and hook-laden. While the second half of the record is not without its up-tempo tracks ("Till Jockey's Lament" and "Wanted To Be Loved" are both top-notch rockers), it also sneaks in some quality deep cuts. "One More Hole" is "mellow rock" done right, while "Smoke In the Sun" is a wild foray into psychedelic garage territory. "In Other Words" brings John Lennon to mind. "Who's Pickin' On You" is a terrific cover of a little-known gem by the John Borra Band.
With Ten Easy Pieces, Dany Laj and The Looks have delivered a set of pop/rock and roll songs that absolutely delights from start to finish. Laj as a songwriter is as rock-solid and dependable as Carey Price between the pipes. He and Dowling have infused their music with their special chemistry, and that especially comes through on this release. I've never had the pleasure of seeing this band live, but the vibe of this record is how I imagine the vibe of the group's on-stage performances. If you haven't yet seen the music video for "You & Me" directed by Ryan Thompson, check it out below. It's absolutely insane! Ten Easy Pieces releases on LP today on the Toronto-based label We Are Busy Bodies. CD release (with five digital bonus tracks) has been licensed to Rum Bar Records!
-L.R.
https://wearebusybodies.bandcamp.com/album/dany-laj-and-the-looks-ten-easy-pieces
https://rumbarrecords.bandcamp.com/album/ten-easy-pieces
https://danylaj.bandcamp.com/
https://www.facebook.com/danylaj
http://danylaj.com/
https://www.facebook.com/RumBarRecords
https://www.facebook.com/wearebusybodies
Posted by Lord Rutledge at 11:40 AM