The Reflectors - "All Made Up" 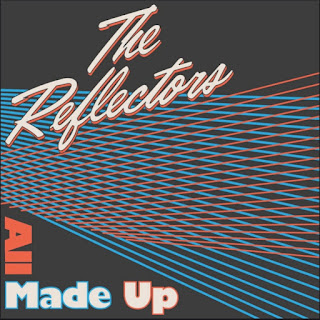 The mighty Reflectors are back with another pair of splendid power pop tunes! Having released one of the finest power pop albums of recent memory in last year's aptly-named First Impression, this Los Angeles foursome is now set to release a follow-up titled Faster Action. The new album's first single, "All Made Up", is out now on Time For Action Records. Again The Reflectors are in classic power pop territory. "All Made Up" brings to mind the vintage LA sound circa 1980 and could practically pass for a lost 20/20 song! With its punchy guitars, huge catchy chorus, and thoughtful lyrics, it's every bit on level with the best songs off of First Impression. On the B-side, "Every Time" is exclusive to this release. It's on the punkier side of power pop -- with more than a little Buzzcocks influence coming through. In typical Reflectors fashion, this song will have you tapping your toes and humming along in no time flat!
Colored vinyl editions of "All Made Up" have already sold out, but copies still remain on black vinyl --- for now! Be sure to hit up Time For Action Records for ordering information. Stay tuned for news about The Reflectors' new album!
-L.R.
https://reflectors.bandcamp.com/album/all-made-up
https://www.facebook.com/thereflectorslosangeles
https://www.timeforaction.de/shop/the-reflectors/all-made-up/
https://www.facebook.com/Time-For-Action-Records-299324823433736
Posted by Lord Rutledge at 6:51 AM

2 amazing songs!! but $6.90 for the download on bandcamp. Yikes. I wonder if that price was intentional?