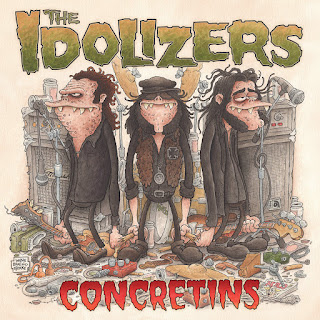 The Idolizers are back! Less than a year ago, this New York City based punk group released a terrific debut EP on Rum Bar Records. ConCretins, the follow-up, builds off of The Idolizers' foundational sound but also shows considerable growth. Paired down to a power trio (MikeDee ThrillSergeant on bass and lead vocals, Jon Pozzuto on guitar, and Tommy Brimstone on drums), The Idolizers continue to exemplify New York style punk rock and roll. Out on Rum Bar Records, ConCretins features seven tracks of gritty, high energy rock and roll steeped in the sounds of '77 and its musical progenitors (Stooges, New York Dolls, MC5). From the opening strains of "Action!", it's apparent that The Idolizers remain faithful congregants of the church of the Dead Boys and Johnny Thunders. However, this release finds the band branching out a bit and incorporating some power pop influences into its glam/punk/rock and roll attack. Songs like "Riot Radio" and "Until Then" are hooky, sing-along numbers with plenty of hop in their step. Elsewhere, the band brings the thunder on the blistering "All the Way" and tears into some timeless old style punk rock on "All Night Long". The very essence of New York City comes oozing out of every note these guys play. This, my friends, is real deal punk rock and roll. Crank these tunes loud and let the world know that you are not to be messed with!
-L.R.
https://rumbarrecords.bandcamp.com/album/concretins
https://www.facebook.com/RumBarRecords
https://www.facebook.com/IdolizersNYC/
Posted by Lord Rutledge at 7:14 PM