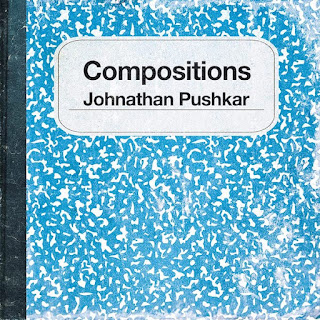 Well Johnathan Pushkar has gone out and squashed the sophomore jinx! The Nashville-based pop tunesmith is back today with Compositions -- his second album on the legendary Jem Records. I described his 2019 debut Straighten Up as "the Wonders album that never was". And while Compositions remains largely in that same British Invasion/'60s pop lane, it is by no means a mere repeat of its predecessor. On this release, Pushkar really comes into his own as a storyteller. Each song presents a self-contained story. And while the subject matter largely pertains to love and relationships, these songs do reflect Pushkar's personal growth over the past couple years. Like so many others, he found himself changed by the events of 2020. What results is a more mature and well-rounded sophomore release from one of the pop world's most charming and impressive young talents.

Written from the perspective of a young man eagerly anticipating a long-awaited reunion with his sweetheart, "Any Second Now" sets an optimistic tone that does bring Straighten Up to mind. And a song like "Can't Get You Out of My Mind" reminds us that the Johnathan Pushkar we first fell in love with is not completely going away. But what makes Compositions so appealing is how it runs through such a wide range of emotions and human experiences. The Beach Boys inspired "Does What She Does" spins a tale of a girl who lives to breaks hearts, while "Just Friends" dives deep into the pain of unrequited love. "Alexandra" is a sinister story about a girl who never wants to leave your side -- literally. "Making Plans" is about spending a summer apart from your true love and pretty much just wanting to be miserable the whole time (sounds like something I would have done!). Elsewhere Pushkar crafts tales of destined love ("Red Eye") and abandoned dreams ("No One Ever Said You Had To Stay") that are practically novels condensed into three-minute pop songs. For me, the high points of the album are "Gonna Be Alright" and "Love Will Save the Day" -- where Pushkar reflects on the trying times of the past year and ultimately offers reassurance that things will get better. It's as if he's giving the listening audience a giant virtual hug. I, for one, welcome that very much!

Compositions, like Straighten Up, was produced by Wyatt Funderburk. I would be hard-pressed to name a more perfect union of artist and producer. Both of these guys are all about timeless guitar pop, and together they create magic. The influences driving Compositions range from Buddy Holly to the Beatles to the Beach Boys to modern-day power pop, yet there's never a doubt that you're listening to a Johnathan Pushkar record. His voice and style are unmistakable. His innate likeability, which was already undeniable on Straighten Up, has reached another level on Compositions. Listening to this album is like spending time with a good friend. Compositions is a big step forward for Johnathan Pushkar, yet it still satisfies on a pure pop level. You know how sometimes you'll hear an artist's sophomore release and call it "different" because you can't say it's better than the debut? Well there's no need for the D-word in the case of Johnathan Pushkar's sophomore long player. Compositions is considerably better than its predecessor and an absolute treat for all of you who love guitar-driven pop music.