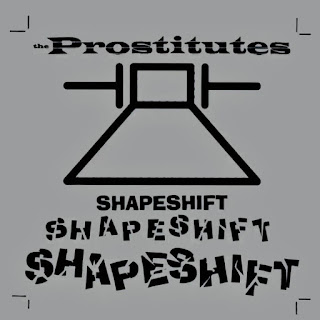 When it comes to all of the things that are cool about music blogging, it does not get any cooler than having the opportunity to write about the almighty Prostitutes in the year 2021! I came up in the later '90s era of punk rock and will forever insist that The Prostitutes were the greatest punk group of that period. After the band's first and second breakups, I lamented that this musical force of nature had been silenced forever with so much more left to give. But with the tenacity of a cockroach, Kevin McGovern has re-grouped The Prostitutes time and time again in different locales with different lineups. And the one thing that has remained unchanged through it all is the quality and the power of the music. Out on Last Punkers Records, the band's new EP "Shapeshift" is its first vinyl release since 2009. It took six months to record and probably even longer to be pressed due to COVID-related delays. But it was well worth the wait and will disappoint absolutely no one.
Much like The Prostitutes' recent digital releases ("Shake Rattle Die", "Nineteen", "Cheap Highs"), "Shapeshift" retains the fire and the ferocity of The Prostitutes' vintage recordings while adding modern production touches and the kind of sophisticated songwriting approach you'd expect from a seasoned veteran of the punk scene. Dark and raging but also catchy and tuneful, "Shapeshift" is everything you could want from a Prostitutes song. On the B-side are two more ace tracks: the moody, hard-hitting "Needle In the Red" and the fierce, blistering "Rat Race". Vinyl is limited to 300 copies (50 on black and 250 and violet) and is sure to go fast. If you've been waiting a decade plus for the return of The Prostitutes to your turntable, satisfaction is guaranteed! And when it comes to that voice, there's nothing else like it in the punk world!
It's still hard for me to believe that my first Prostitutes review was written 25 years ago. If you had told me back then that Kevin would still have this band going in the dystopian future of 2021 and would still be making records this good, I would have sworn you were insane! Click here to order the vinyl!
-L.R.
https://theprostitutes1.bandcamp.com/album/shapeshift
https://www.facebook.com/tutespunk/
https://lastpunkrockersrecords.bigcartel.com/
Posted by Lord Rutledge at 11:41 AM