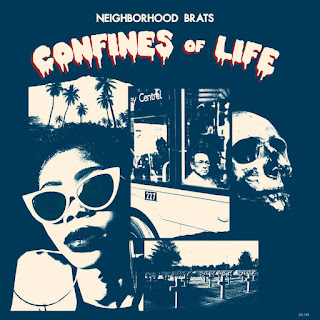 We've arrived at that time when the great full-lengths albums of the year are really starting to pile up. And while I've struggled to keep up with all of them, my intention is to make sure I hit all of the most essential titles sooner or later. It sometimes feels like I've been writing about Neighborhood Brats forever. It's actually been just short of ten years. It's kind of hard to believe, then, that the band's new LP Confines of Life is only its third full-length album! Out on Taken By Surprise Records in Europe and Dirt Cult Records in North America, Confines of Life is the Neighborhood Brats' most stylistically diverse album yet -- and also its most urgent! On this release, vocalist Jenny Angelillo, guitarist George Rager, drummer Nick Aguilar, and bassist Mike West continue to operate under the influence of first wave California punk and early '80s punk/hardcore -- while also adding elements of pop, surf, post-punk, and modern punk rock. Angelillo and Rager -- who have kept this band going through multiple lineup changes over the years -- have found another dynamite rhythm section in Aguilar and West.

Confines Of Life, which blazes through 12 tracks in 22 and a half minutes, matches its furious musical power with a message that comes through clear as day. Neighborhood Brats aren't pulling any punches: they have no patience or tolerance for racism, sexism, transphobia, xenophobia, fascism, the patriarchy, or misogyny. On this album, they rage against many of these things while lamenting a world besieged by environmental crisis, systematic oppression, and economic inequality. Songs like "Who Took The Rain" and "Transitional Housing" find the band embracing a pop sensibility like never before, while "Migraines" is a perfect example of what "post-punk" music ought to be. "Signs and Semantics", which is all at once dark, melodic, and intense, is the kind of song that nobody could pull off quite like Neighborhood Brats do. And with this being a Neighborhood Brats album, you know to expect your fair share of raging and pissed-off hardcore tracks. "FFBF" and "Harvey Weinstein Is A Symptom" are two of the best songs this band has ever done in that vein, and they should be played excessively loud while you scream along to every lyric.

Is there a better punk rock band in existence than Neighborhood Brats? Honestly, I can't think of one! This band has it all: musical chops, a powerhouse singer/lyricist, excellent songwriting, and something (actually lots of things) to stand for. While Neighborhood Brats have not veered far from their original musical blueprint, they have continually progressed through their early EPs and each of their full-length albums. Confines of Life manages to be a vintage Neighborhood Brats album even as it finds the band taking another step forward. Even with all of the wonderful styles of music that exist in this world, there are times when nothing but kick-ass punk rock will do. If you find yourself in that situation, I highly recommend Confines of Life.