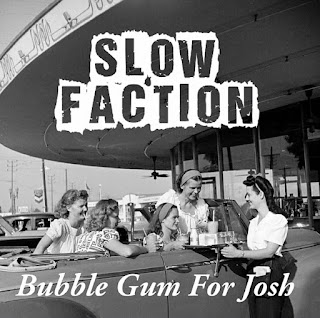 Well I can definitely say that in my long "career" of writing about music, this is the first time that a band has ever dedicated a song to me! I must say it's an honor! This all started when I wrote, "Slow Faction doesn't write songs about bubblegum and pretty girls". Born from that joke is a brilliant new demo titled "Bubble Gum For Josh". What I appreciate about this song is that it's an impassioned reflection on Slow Faction's purpose and singer John Youens's growing sense of alienation from a culture that has become desensitized to injustice. Essentially this song explains why Youens doesn't write songs about bubblegum and pretty girls. It's not that he's a miserable human or some kind of Debbie Downer. Simply put, his songs reflect the world as he sees it.
Clearly I have no objection to bands that do write songs about bubblegum and pretty girls. But there's also plenty of room in this world for music that aspires to make the world better a place or at the very least rage against the forces that oppress. The history of protest music is practically as long as the history of music itself. Slow Faction is a politically-minded punk group in the classic style, and "Bubble Gum For Josh" is a vintage Slow Faction track. It delivers its message loud and clear. But first and foremost, it's a great anthemic punk tune in the tradition of The Clash and Stiff Little Fingers.
The modern use of "social justice warrior" as some sort of slur is the ultimate Orwellian perversion. Who in their right mind wouldn't want to be a warrior for social justice? Slow Faction ought to wear that tag like a badge of honor. Not everyone wants to hear the message, and that's perfectly okay. But contrary to what is said in this song, people are listening. Give 'em hell, boys!
-L.R.
https://slowfaction.bandcamp.com/track/bubble-gum-for-josh-demo
https://www.facebook.com/slow.faction
Posted by Lord Rutledge at 9:32 AM