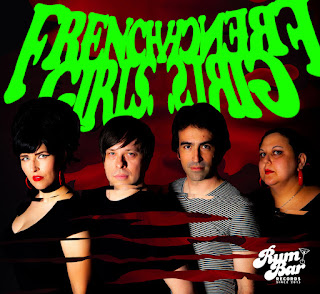 Based in Phoenix, Arizona, French Girls are fronted by Che Beret (aka Chela from The Peeps and Hell on Heels). Chela is an alumnus of some of the coolest record labels this planet has ever known: Bomp!, Dionysus, Sympathy for the Record Industry, and Lipstick Records. You can now add Rum Bar Records to that formidable list. Out today on Rum Bar is the first full-length album from French Girls -- which kicks out ten tracks of exhilarating garage punk in just 21 minutes. Joining Chela (bass, vocals) are guitarist Jean Jacques Clouseau III, guitarist Michel Ouioui, and drummer Chiffon Baton (let us take a brief moment to applaud the sheer brilliance of those stage names!). Musically, this band totally hits that sweet spot where garage rock intersects with punk rock. That may seem like an obvious definition of garage punk, but these days you can't be too sure. French Girls bring us the real deal stuff: simple trashy pop tunes that are full of energy and attitude and straight-up fun to listen to. This band doesn't believe in any sort of musical excess. None of these tracks go too far past two minutes, and you never have to wait long for a hook. My first thought after popping this disc into my car player was, "This sounds like it could have come out on SFTRI a couple of decades ago!". The modern-day garage scene is sorely missing more bands like this, and I will gladly deign to cliché and call this album a breath of fresh air. "No Morals" is an instant garage punk classic. "Summertime" merits permanent placement on your "essential summer songs" playlist. "Aerobicise", re-recorded from the band's 2013 debut EP, is one minute and 45 seconds of pure energy and excitement. These ten tracks always fly by in what seems like a flash, and then I just push play and re-start the fun! If you, as I, fondly recall the late '90s/early 2000s heyday of garage punk, this debut long player from French Girls will be music to your ears.
-L.R.
https://rumbarrecords.bandcamp.com/album/french-girls
https://frenchgirlsphx.bandcamp.com/
https://www.facebook.com/frenchgirlsphx
https://www.instagram.com/frenchgirlsphx/
https://rumbarrecords.bandcamp.com/album/french-girls
Posted by Lord Rutledge at 10:31 AM