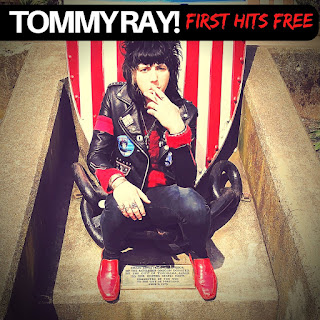 "Long-awaited" is a phrase that often turns up in my reviews. But I don't think it's ever been more suitable than it is today. The Cry! released two of the greatest albums of the last decade in 2011 and 2014, and we've been waiting for a follow-up ever since. The long awaited First Hits Free by Tommy Ray! is not quite a Cry! record. But it is a solo album from The Cry!'s lead singer and primary songwriter. Many of these songs were written for The Cry! but ultimately not chosen for the band's third album (which will likely be completed this year...fingers crossed!). This album is a little "less produced" compared to The Cry!, but Ray's songwriting has never been stronger. He wrote most of this material himself, with assistance in spots from John Nelsen and Brian Crace.

Musically, First Hits Free has more of the power pop feel of the first Cry! album vs. the glam-punk vibes of Dangerous Game. Even when he's writing about very serious subject matter (which he frequently does on this album), Ray has a knack for wrapping it all up in these irresistible pop hooks. First Hits Free is very much in The Cry!'s patented style of '70s power pop and punk by way of the timeless melodies of '60s rock and roll. But it definitely feels like a solo project, and I love how it's reflective of how far Ray has come as an artist. He's been working hard on this album for a few years now, and you can hear his growing life experience coming into these songs. This record really takes me back to my own later 20s: a time of much disappointment, uncertainty, frustration, and heartbreak. If you just skim the surface of these songs, you might take this for a textbook power pop album. This thing is full of memorable melodies, hooky choruses, and the catchiest guitar leads you could ever hope to hear. But lyrically, Ray pushes far deeper than he ever has before. Songs like "Life Goes On", "Hey Susanne", and "Trouble" find him coming into his own as a storyteller. And while he's still writing love songs, they're for the most part about the bitter letdown of failed relationships ("Ain't No Use", "Tuesdays Girl", "Good Luv - Gone South"). I love how "Take A Chance" seems so upbeat and innocent...until you really start paying attention to what Ray is singing! That's also true of "Voices" - a punky number that tackles the very serious issue of schizophrenia. "No Better", the album's penultimate track, finds Ray's songwriting ascending to new levels of complexity and sophistication. I'd call it the magnum opus of his songwriting career so far.

While rawer than both Cry! long players, this full-length debut from Tommy Ray! ought to delight anyone who loved those albums. Ray's style of singing and songwriting is instantly familiar, and if anything he has refined and grown his talents over the last six years. First Hits Free is just a fantastic pop record, and I find it a very authentic rendering of what it's like to be a young man still trying to navigate adulthood. This is a guy who's busting his ass to make it as a musician, and he's given us an album full of his reality. We don't have to call it the "next best thing" to a new Cry! record since we're actually getting a new Cry! record in the near future. But even if we weren't, this would be a tremendously satisfying next chapter in the musical life of Tommy Ray! Digital album is releasing later this month on Apple Music, Spotify, etc. Physical release coming on the German label GadM and SP Records out of Japan!

Sweet review. I like the record too. It is pretty "real" and gritty but still has that pop twink. One person said he write songs that are like "cotton candy with razor blades."