Dark Thoughts - Must Be Nice 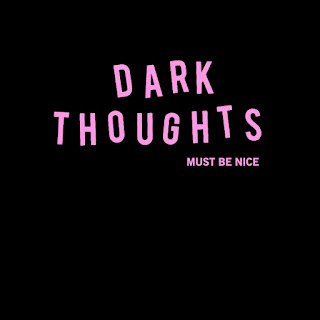 Dark Thoughts' Must Be Nice is either the last great punk rock album of the 2010s or the first great punk rock album of the 2020s. Take your pick! This is the Philly trio's third album since 2016, and it feels like they've just capped a holy trinity of modern-day punk rock. I think it's almost unfair to categorize this band as "Ramonescore". Instead I'd just say they're a great punk rock band who happen to be inspired by the Ramones (and what great punk band isn't?). Dark Thoughts haven't really altered their approach since their first album. Only two tracks on Must Be Nice exceed two minutes. And as always, the band's m.o. is to keep it simple & catchy and write deceptively good tunes. The songs leave you wanting more, and then the album ultimately does the same. Dark Thoughts could write the manual on how to worship at the altar of the Ramones without trying to be the Ramones. The closing title track hints at some room for growth/expansion of the band's core sound, so don't be surprised if Dark Thoughts top themselves again in a year or so. Must Be Nice officially releases January 17th on Drunken Sailor and Stupid Bag Records!