Hayley and the Crushers - Vintage Millennial 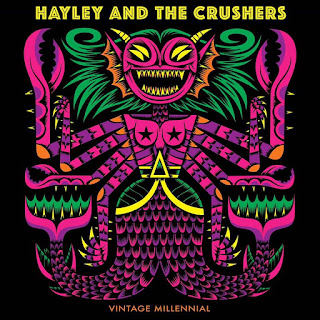 In case you were wondering how far I would go into 2020 before anointing a prime contender for album of the year, the answer is exactly 21 days! In lieu of writing a review of Hayley and the Crushers' new album Vintage Millennial, I considered just embedding a video of me jumping up and down and screaming in delight as I was hearing it for the first time. Seriously: I've been freaking out over this thing! I was a big fan of the band's previous album Cool/Lame, but I wasn't quite prepared for how hard Vintage Millennial was going to hit me. This is my cup of tea in a 48-ounce container. Described by the band as "modern snark with an oldies heart", this album finds the California trio elevating its fun-filled brand of soda pop-punk bad girl surf rock and roll to new heights of awesomeness. I was hooked from the first note and delighted all the way to the end. Committed as ever to their signature "poolside glitter trash" aesthetic, Hayley, Dr. Cain, and drummer Benjamin Cabreana have come on with their biggest hooks and most righteous tunes to date. This album is the soundtrack to a beach road trip where the itinerary includes surfing with sea monsters, guzzling Slurpees, and detouring to the nearest late 20th shopping mall still left standing. And that's exactly the escapism I crave in the dead of an East Coast winter.

The songs comprising Vintage Millennial are upbeat, fun, and crazy catchy - yet also full of smarts, substance, and tremendous heart. Opening track "Put A Little Action In Ya" could very well have the Crusherverse taking over the airwaves. This is feelgood punky pop at its finest, with lyrics that are just naughty enough to get the message across. I've always believed that there need to be more songs about enduring love, so I really have a soft spot for "Kiss Me So I Can". From my married guy perspective, I must say this song is both adorable and incredibly truthful. A title like "Gabbie Is A Domme" would be played as a joke by a lesser band. But in the hands of Hayley and the Crushers, this tune is sweet, heartfelt, and a wonderful testament to empowerment. It's got to be the purest pop song I've ever heard this band do. All I have to do is close my eyes, and the instrumental "Forever Grom" places me at a swim-up pool bar by the beach. Elsewhere the trio steps a foot into early '80s California new wave power pop ("If You Wanna Dance"), pays loving tribute to the uncrowned people's champion of Drag Race ("Shoulda Been Shangela"), and imagines the sinister secrets lurking within one of Berlin's most famed landmarks ("Poison Box"). And a couple of covers here are perfect for the vibe of the album. A splendid rendition of Kim Wilde's "Water On Glass" acknowledges what has to be a huge influence. The X classic "Los Angeles" also gets fully Crusher-ized, with certain lyrics updated for more enlightened times.

The slate of full-length albums for 2020 looks to be super stacked, but Vintage Millennial is going to be very hard to beat this year. This is exactly the album that we need right now. And I don't just mean now as in January. I mean now as in the world really needs a band like Hayley and the Crushers that is all about spreading joy, love, and sunny vibes everywhere it goes. Clearly this is a band that ticks all my boxes as a fan of bubblegum punk and power pop. But that's only the half of it. I can't think of a band that does a better job of taking classic influences and reworking them into something that's original and "now" for modern times. And in a music scene where so many acts seem interchangeable, this is one band with personality that's off the charts. No matter what the weather may be, Vintage Millennial needs to be cranked loud with the windows down and your cup-holder occupied by a cold fizzy beverage.