bauwaves - u r everything 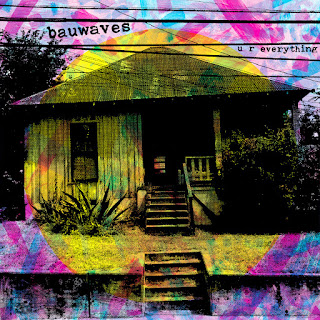 If the name bauwaves is new to you, it's likely because the Austin-based trio is releasing music for the very first time. Out this Friday on Salinas Records, u r everything is the debut album from this band comprised of Lew Houston (ex Wild America), Rob Barbato (Darker My Love), and Art Limon (The Anchor). Yes, Lew Houston is an old friend of mine. And it's a pleasure to finally review his music since I was in the midst of a long hiatus when Wild America was putting out records circa 2009-2010. There's a very personal story behind this record that Lew has willingly made public. Bauwaves came to be in the wake of his extreme personal crisis. He spent the year 2016 mired in a crippling bout of depression that compelled him to contemplate self-harm and quit writing songs for the first time in a decade. Gradually he found ways to get his depression under control, and a new song popped into his head one day in early 2017. So he got out his guitar, started writing, and before long he had created the songs that make up u r everything. The band spent most of 2018 refining the material and finally recorded the album in the spring of last year.

To say that Lew Houston holds nothing back on u r everything would be a tremendous understatement. This album chronicles the horrific year he spent battling depression, and the vocals and lyrics are absolutely intense. Sometimes with loud guitar bands like this, words can get buried in the noise. That doesn't happen here. Lew's vocals are very clear and direct - like he's speaking to you personally and baring his soul. You can absolutely feel the depths of his despair. Musically, bauwaves sound like they've appeared right out of the pages of Our Band Could Be Your Life or an SST Records catalog circa 1987. Husker Du and Dinosaur Jr. are obvious points of reference with the huge wall of guitar fuzz and bare bones production. The heaviness and honesty of the lyrics also bring to mind Bob Mould's solo recordings and work with Sugar. I sometimes question the future of the "album" as an art form in the digital age, but u r everything is an example of why I shouldn't. Sure, you can listen to any of these songs in isolation. But this album was clearly intended to be taken in as a whole. It's essentially a non-fiction novel in musical form. It's not always the easiest listen, but it's a powerful experience to follow Lew through the darkness and all the way back into the light. The band skillfully creates contrast between the melodic, energetic music and the often bleak subject matter of the songs. "into the light" and "to the floor" are fierce, ripping punkers; while the likes of "too far away" and "early morning summer" are densely slow-burning confessionals. "it ain't real" is full of thundering power, then suddenly takes a psychedelic turn. "just for kicks" has got to be the darkest Ramones-inspired song I've ever heard.

Human beings create art for a great variety of reasons. One of them is to share personal experience in such a way that others will relate, feel kinship, or at least understand. In this respect, music, film, literature, etc. can genuinely unite us human beings. If you've battled depression yourself, u r everything is an album that will assure that you're not alone in your suffering. If you haven't, it will give you a greater insight into what it's like to be stricken with this affliction. At a broader level, bauwaves are a band that will appeal to anyone who fondly recalls the heyday of 1980s college radio and noisy indie rock. This album is a  brave and uncompromising creation that crackles with energy and intense feeling. It's a fine debut - one that offers great promise of what's to come with bauwaves already at work on a follow-up.