The Speedways - "Kisses Are History" 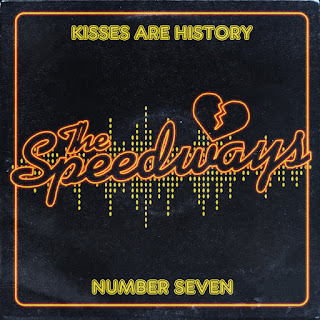 Your power pop dreams have come true: we've got a brand new single from The Speedways! "Kisses Are History" is The Speedways' second single, and it features the first original material they've released since becoming a proper band. Matt Julian launched this group as a solo project two years ago. Now with Mauro Venegas (guitar), Adrian Alfonso (bass), and Kris Hood (drums) in tow, The Speedways look to be the best new power pop band to come down the pike in a whole lot of years. The London foursome will release a new album called Radio Sounds later this year, and "Kisses Are History" is its lead single. It's every bit the stunner I was expecting - an absolutely beautiful pop song weaving a devastating tale of love gone terribly sour. Boy, can Matt Julian ever write a tearjerker! Thematically, this number is right in line with the band's previous output. But a full band and stellar production take The Speedways to a whole other level. Think British Invasion pop meets '60s girl group melodrama, updated for the 21st Century. Any old band can play this general brand of guitar pop, but Matt Julian has a particular talent for crafting a gorgeous melody and marrying it to a vocal that believably articulates the depths of heartbreak. I can practically see the ghost of Pete Ham nodding in approval. This is a new high point for The Speedways. The backing vocals and lead guitar work are exquisite! On the flip side, "Number Seven" is a snappier power pop tune that would have been right at home on Stiff Records back in the day. It's definitely more of a rocker, but with a sing-along chorus that is not humanly possible to resist. This is the kind of song you've got to have in your repertoire when Kris Hood is your drummer. It delivers the power and the pop in equal doses. Altogether, you've got the perfect "double A side" single here: one song to cry to and another to dance to.

"Kisses Are History" is available now in digital format, with a vinyl release coming very soon from SNAP Records and Hurrah! Música. Pre-orders for the 7" will be available starting Monday. This is about as perfect as pop gets, so press play and enjoy!

I agree mr lord, this is great. cheers with a beer.