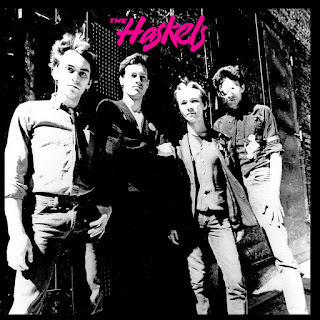 After 40 years, the lost album from legendary original era Milwaukee punk band The Haskels finally saw the light of day this past November. This release from Clancy Carroll's Splunge Communications was met with an incredible response from the international punk rock community. The album literally sold out in three days!

I find this entire project to be cool for a number of reasons. First and foremost, this is the first time ever that the original Haskels have been extensively represented on record (the "Taking The City By Storm" EP was released after the four Haskels splintered into two different bands at the end of 1979). Most of what many of us knew about The Haskels was learned from people who witnessed the band live in Milwaukee during its 1977-79 run. Now we all get to experience the music itself. These 14 tracks, recorded in 1979, have been restored from the original, never-before-mixed tapes and released into the world. And it's immediately clear why The Haskels are an important band in the punk rock history of not just Milwaukee, but the entire American Midwest. I'm notoriously fanatical about first wave punk rock, so of course I'm geeking out over getting to hear some authentic '70s punk straight out of the time capsule. Led by the songwriting/vocalist tandem of Presley Haskel and Richard LaValliere (both sadly no longer with us), The Haskels were typical of the originality and musical diversity that existed within early American punk. You can hear some nods to other punk bands of the time, along with a very palpable Stooges influence. But overall, this is the sound of a band writing its own rules for what punk music ought to be. "Baby Let's French" could be mistaken for a lost artifact from the heyday of New York punk, while "Little Dolls" is steeped in the thumping traditions of garage rock and pre-punk. Songs like "Hard To Smile" and "Stay All Night" embrace the pop sensibilities of the rock and roll of yore. Meanwhile "Psycho Hairdo" and the classic track "Liberace Is Coming" are as offbeat and wonderfully unconventional as it gets. "Body Language" just might be the best song Richard Hell never wrote!

Bringing The Haskels' lost album into proper existence would have been a worthy endeavor even if it had just been for the sake of nostalgia. But when you sell out of an entire pressing in three days, it's not just old fans buying the record. The key here is that this album is genuinely really good. The songs are terrific, and the band's musical chops are formidable. These 14 tracks offer further proof that great punk music in 1970s U.S. wasn't just coming from New York and California. If you're interested in the history of punk music or the Milwaukee scene in particular, this is an essential purchase. But it also stands on its own as a remarkable punk record. To meet demand, a second pressing of this LP has been ordered (and should be arriving soon). You can also get the digital album from Bandcamp. Hello world, here is workers' rock and roll!