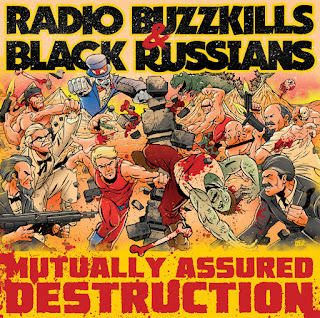 HOLY SHIT! The Cold War has turned hot with the inevitable confrontation of pop-punk superpowers. Mutually Assured Destruction is the name of the record, and this is the clash of adversaries we've been awaiting since 1947. Flying the flag for the USA, the Radio Buzzkills come armed for battle with the only three chords they'll ever need. They dare to square off with the mysterious Black Russians, who have been lurking behind the Iron Curtain in preparation for the obliteration of capitalism and the entire western way of life.

Fresh off of delivering one of the finest pop-punk albums of recent memory, the Radio Buzzkills could have been excused for running low on sonic weaponry. But they have successfully re-loaded for this epic confrontation with their arch-enemies. "You're My Chernobyl" is a classic mid-paced pop-punk love song with snotty vocals, cool '50s/'60s inspired harmonies, and more than enough Soviet references to get their foes' blood boiling. And then for the real burn, "Can't Stop the Western Bloc" immortalizes the Miracle on Ice and the cracks it placed in the myth of Russian supremacy. This track demonstrates to me the magic of the Radio Buzzkills. Under ordinary circumstances, hearing a song in the style of Screeching Weasel would just make me want to listen to Screeching Weasel. But in this case, I must say I'd rather listen to the Radio Buzzkills. I can't quite tell you why, other than that this is about as perfectly executed as pop-punk music gets.

Undeterred by the Radio Buzzkills' unprecedented display of power, The Black Russians counter with the might and menace of an internationally feared fighting force. "We'd Have A Riot Doing Krokodil" is really just the warmup. Ever wonder why the Communist Party never had its own party anthem? Well "Communist Party" is exactly that - the theme music you cue up when you've crushed your enemies, achieved world domination, and really need to let loose. If Khrushchev and Castro had thrown an epic kegger in 1962 and brought Sloppy Seconds back in time to rock the stage, it would have sounded an awful lot like this. Dig that first-class guitar shredding! "Ain't Putin Up With You" brings the East/West beef into the modern arena with a pop-punk meets Motörhead rocket launch that will be felt across all continents.

War has been declared, and shots have been fired. It is impossible to determine a winner. These are two of pop-punk's best bands, and they've both brought their A-games. Luckily the title of Mutually Assured Destruction proved to be incorrect. We can now retreat to our bunkers and anxiously await a sequel!