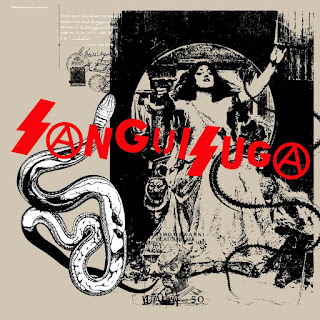 Does Marco Palumbo ever sleep?! In addition to running the illustrious No Front Teeth Records, he's also managed to release music with his bands Miscalculations, The Gaggers, Telegenic Pleasure, The Flesh of the City, La Rabbia, Cold Callers, Disco Lepers, and Botox Rats all within the last four years. He couldn't possibly have had another band in the works, right? Wrong! He created Sanguisuga with some band-mates of his, and for good measure he's singing everything in Italian! Is there anything this guy can't do? I swear he's going to be the first punk singer to perform on the moon! Sanguisuga (translates to "leech") has released its self-titled debut album on Wanda Records. Stylistically, this isn't far from the Gaggers (you can especially hear it on "Disumanizzato" and "Serpente Odioso"). Think razor-sharp '77 punk snot with a hint of Killed By Death influence. Obviously I don't know what the lyrics are, but I'm 100 percent sure Marco isn't singing about sunshine and roses. His caustic, snarling vocals are immediately recognizable in any language. There are some interesting touches in the songwriting on this record. "Guerra Psicologica" reminds me a little of The Stitches, while "Esistenza Inhumana" is firmly in modern punk/post-punk territory. "Declino Sistematico" has an early '80s SoCal vibe to it with the melodic guitar and backing vocals. This debut from Sanguisuga is full of snotty punk bangers that are sure to please fans of any of the aforementioned bands. It's one thing to be merely prolific, but it's another thing entirely to be in all of these bands and consistently turn out killer recordings. Yet another top-notch effort from Marco and friends!