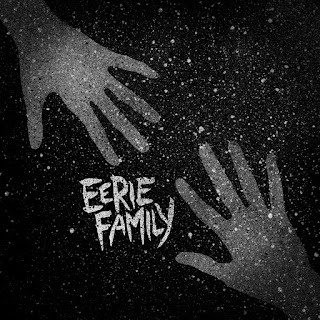 Here we go with another great release from Alien Snatch Records! Although this one is probably not what you would expect. Eerie Family are Alex and Alyse from Hex Dispensers playing music very much unlike Hex Dispensers. Their self-titled LP just released on New Year's Eve. Call it whatever you like: Goth, death rock, dark wave, or (as the label terms it) gloom pop. Any way you shake it, this is a gorgeously creepy creation that fuses elements of post-punk and synth pop with a spooky worldview and this duo's well-defined predilection for melody. I suppose an "upbeat" Goth song is a contradiction in terms, but opening track "Everybody Disappear" manages to be exactly that. It's as hook-laden as it is creepy, and that's really saying something. It's like a love anthem for ghouls, creatures, and zombies everywhere. "A Ghost Who Lives Inside Your Heart" is a chillingly beautiful number channeling the bleak minimalism of Joy Division by way of The Cure and Jesus & Mary Chain. "Dead Stars Still Shine On Us Tonight" could not be more haunting, yet it pulls you in with captivating melodies and nicely harmonized vocals. "I Am Tarantula", told from the point of view of a feared creature that just wants to be loved, is driven by a fittingly playful synth line. "I Hope the Sun Explodes Today" is an old Hex Dispensers song that you might barely recognize. There's a refreshing simplicity to the structure of these songs. Every drum beat and keyboard note comes off carefully considered, and the vocals are eerie in a way that sounds natural and not comically overplayed (a frequent weak point for this genre of music). I'm not generally a fan of "dark" music, but I have been fully won over by Eerie Family. Beyond all else, this is simply fantastic pop. It certainly doesn't hurt that Alex and Alyse have such splendid chemistry, and overall this is a perfect example of how to take death rock and make it full of life. "You only need enough friends/To carry your casket when you're dead" is some of the most profound wisdom I've encountered in a long time!