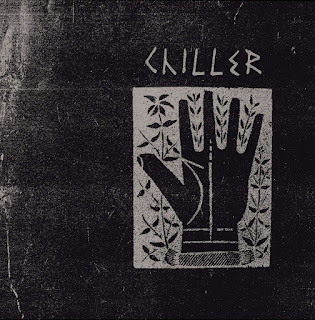 Before I could even think about writing about new music in 2019, I wanted to go back and look at the releases from 2018 that I most regretted missing. Up first is an album that I'm nearly a year late getting to. It's the debut from Moncton, New Brunswick's Chiller, released in February of last year by Dirt Cult and Rockstar Records. It was personally recommended to me by Daryl Buote, who had it as his #1 album of the year. I was able to really sit down and spend some time with this release over my Christmas break, and I must say that I was absolutely wowed by it! This thing is a stunner!

Chiller is Ilisha and Eric from Feral Trash essentially doing a continuation of Feral Trash. With this band, Ilisha moves from drums to guitar and the lineup is rounded out by Erin from Black Tower and Tim from Mother's Children. As you would expect, this album is not too far off from Feral Trash. It's dark melodic punk with the expected reference points (Wipers, Masshysteri). That sort of thing is sometimes to my liking and far more often not. In the case of Chiller (what a fitting band name!), I'm really into it. Part of that is that they pay just as much attention to the "melodic" part of the equation as they do to the "dark". These are well-crafted songs that are hummable in a totally sinister way. Perhaps more importantly, I'm struck by how this band achieves a sound that is so very dark yet so often quite beautiful. There are truly amazing things going on with those guitars. And even with the songs mostly staying under three minutes, there's a level of sophistication and texture to these tracks that goes way beyond punk. This is the perfect album to listen to on your headphones as you take a long walk on a cold, gloomy day and reflect on your life. I can see why a February release was so ideal. If you're starting to suspect that there's something in the air in Moncton that produces amazing music, well I'd say that's pretty much scientific fact at this point.

I liked both of the featured tracks. Really heard the Wipers leanings on "Strangers."