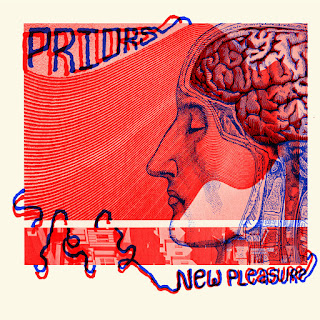 I did not include this review in my "unfinished business" series, mainly because I consider an album that came out less than two months ago to still be a "new" release. But I cannot close the book on punk music in 2018 without addressing the ripped out earhole I was left with after experiencing the sophomore LP from Montreal's Priors. Released on Slovenly Recordings, New Pleasure is next-level stuff as far as garage punk is concerned. The band powers through track after track of fast & furious punk rock that aims to figuratively bash your head in. Yet there's so much more than that going on here. Priors' musical attack is not just ferocious but also jittery, weird/creative, and noisy in all the right ways. If running around screaming and breaking stuff sounds like a fun day to you, this album would make the perfect soundtrack. I'm often okay with garage punk bands who sound like other garage punk bands (hell, I've been known to praise a lot of them for exactly that). But I find myself quite pleased to hear Priors and note that they're genuinely doing something I haven't quite heard before. I always like an album that takes me from "What in the hell is this?!" to "This is goddamn brilliant!" in just a matter of moments. Don't be fooled by the opening track into believing this album is going to be some sort of synth-pop type deal. Otherwise, you will be unprepared for the racket "Got In Me" is poised to kick up. And any letup after that is purely temporary. It all makes for a punk rock album that is truly exciting (imagine if Wire and the New Bomb Turks made a baby and sent it on a rocket to outer space). Priors have come to pummel your eardrums, and you're gonna love every last minute of it!