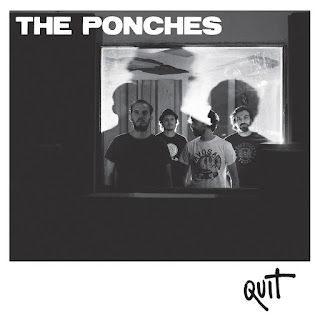 The first new release from The Ponches since 2015's Hum is a rather bittersweet moment for pop-punk fans. After a 13-year career as a band that produced two full-length albums and several EPs, The Ponches called it quits last year. Appropriately titled Quit, the Italian foursome's new LP is its last-ever release. It's coming out on Moms Basement and One Chord Wonder Records on a very limited one-sided 12" record. Quit is at least a fine way to go out - displaying the powerful guitars and generally tough sound that made The Ponches stand out in the modern-day pop-punk world. Lillingtons and Riverdales remain solid reference points, but The Ponches could never be dismissed as just another pop-punk clone. There's a sophistication and refinement to the songwriting here befitting a fully-matured punk rock band. I'm even picking up major Descendents vibes on "216", which is a win in my book. Just about any other pop-punk band that wrote a song called "What A Shame (Jani Lane)" would try and make it into a joke. The fact that this band did not is admirable. If The Ponches had to bow out, they've sure done so on a high note.