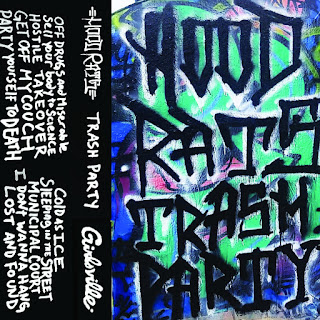 Continuing on my quest to catch up on the releases I most regret not reviewing in 2018, we stay in Canada with The Hood Rats. I recall hearing some early recordings from this Montreal trio a couple years back and thinking there was some real potential. But I was not prepared for the difference that a few months (and a quality recording!) could make with this band. Released by Girlsville this past August, Trash Party is the band's cassette-only debut album. It's 10 tracks of raging punk rock inspired by early '80s hardcore, a little Motörhead/NWOBHM, and the trashy spirit of modern-day garage-punk. For this type of music, Hood Rats have absolutely nailed the ideal sound. They play fast as hell, with ripping guitar leads and a singer who screams every word like he means it. Lyrically, these songs smartly mix themes of urban nihilism with anti-capitalist, anti-government outrage. Could "Off Drugs & Miserable" be any more of an anthem for our times? If you like aggressive punk music that's also catchy as hell, this is a band that's not to be missed. I'm ashamed that a blog calling itself "Faster and Louder" is so late to the party! I believe Girlsville still has some copies of the tape, so get on it!