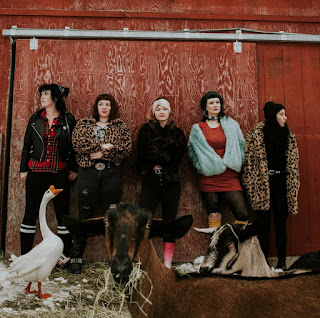 What was I just saying about Moncton? There's got to be something in the air or the water or the Timbits that is producing so much amazing music up there. Up next out of Hub City is Klackers' debut album - released as a limited-edition red glitter cassette designed and packaged by the band. What I love about this release is that it's not really possible to pigeonhole it in today's terminology. It's minimalist and lo-fi, but maybe not quite "garage". It's got a great pop sensibility, but it's certainly not "pop-punk". It's probably too punk to be "indie rock". There are even keyboards! This album definitely has the spirit of something that might have come out on Kill Rock Stars in the '90s with a hint of Radio X Records to boot. It essentially inhabits the world where do-it-yourself/budget punk and lo-fi pop converge, and yet it couldn't sound fresher in 2019. The songs are super catchy, and they're carried off with an attitude and exuberance that are totally infectious. A cover of the Bratmobile classic "Gimme Brains" acknowledges an obvious influence, while "Sleepover" is an absolutely delightful re-imagining of an Adicts song you might know. I feel like if you were 15 and you heard this album, you'd be inspired to start your own band. It creates a "Yes, you can do this too!" type excitement that has me fondly recalling countless punk records I purchased in my youth. DIY lives!