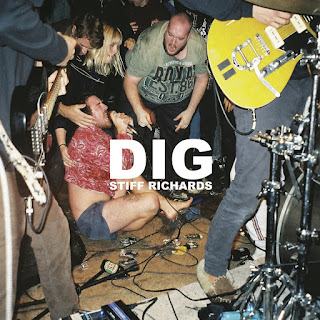 Wait: is this another face-melting punk act from Australia?! You best believe it! Stiff Richards hail from the Australian South Coast and kick up a racket so forceful and ferocious that you'd swear these guys have been listening to Raw Power since birth. Dig is the group's second album, and it will be out on vinyl early next month. In the meantime, the digital version is available via Bandcamp if you're craving some first-class raucous noise. There's nothing fancy going on here: just raw, savage rock n' roll that kicks you straight in the teeth and comes back for more. These gentlemen have definitely absorbed the lessons of the Detroit and Aussie rock of yore, and they manage to invigorate that sonic tradition with an energy that's off the charts. You've got guitars firing at full fury, a punishing rhythm section, and a madman howler on lead vocals who probably literally spits fire. "Do It Right Now" may be as blatant of a Stooges homage as you'll ever hear, but it's also one of the best. Play it at max volume, and you will feel indestructible! And while Stiff Richards are especially satisfying in short, fire-hot doses ("Bad Disease", "Ostentatious"), they sound no less thumping in full-on heavy rock mode. "Dig", which delivers monster riffs and transcendent maniacal screaming from deep within Wolfy's loins, opens the album with a proverbial bang. "PEA", with its call to arms of "Power! Energy! Action!", might as well be Stiff Richards' theme song.

It's always a cliche to credit a band with capturing a "live" energy in the studio. But if Dig sounded any more live, you would be able to smell the sweat and spilled beer. These guys play every note like they're trying to blow the roof off of the joint. Something tells me they've succeeded on more than one occasion.