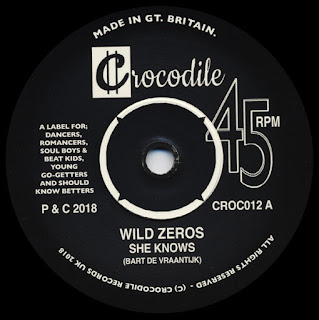 It was just last year that I reviewed the "comeback" record from Bordeaux and La Rochelle France's Wild Zeros. This trio had been unheard from for several years before re-emerging to commemorate its ten-year anniversary. The Motormouth EP on Nerve Centre Records was a much welcomed return for fans of real deal garage punk and wild rock n' roll in general. And now we have more from Wild Zeros on another fine UK label. Out on the always-dependable Crocodile Records, "She Knows" is the hottest track I've heard from this band in years. It's actually a re-do of a song from the band's first EP, but it doesn't take long to understand why they wanted a second crack at this one. This totally blows away the previous version! It's more up-tempo this time, with a rawer, tougher, and way more rockin' sound. While not nearly as blown-out sounding as, say, Teengenerate, it definitely possesses the same spirit. I bet ya this would sound so killer coming out of your turntable (which is pretty much the point of this being a vinyl-only release)! On the flip, the band tempts fate by covering Pack's unfuckwithable classic "Nobody Can Tell Us". It was a ballsy move to take on a song that literally cannot be improved upon. But honestly, Wild Zeros come through with a faithful and very credible version of this song. They honor a band that is clearly an important influence. And if this causes just one person to go back and discover Pack, then mission accomplished. Another smasher from the Crocodile hit factory!