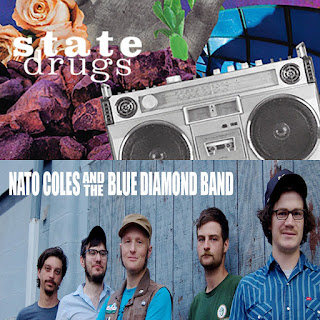 We've been waiting how long for new music from Nato Coles and the Blue Diamond Band?! Numbers don't lie: it's been five and a half years since Promises To Deliver came out. Promises To Deliver has since become my most listened-to album of this decade, and I've found myself starving for new material. Well today I finally eat, and I must say the eating is good!

Taken from the same 2017 recording sessions that produced the band's forthcoming album (yay!), "Dangerous" and "Midnight In Memphis" represent a truly triumphant return from Nato and company. Seriously: if two songs this good did not make it onto the album, I can't wait to hear the songs that did! This pair of tracks would have made a hell of a 45, and perhaps someday it will. But for now these tunes come to us on cassette - one half of a split release with State Drugs out now on Motorcycle Potluck Records. Honestly, State Drugs are a band I would otherwise not be writing about. Self-described as "grown up punk", this Denver foursome is pretty much exactly that. The group plays a melodic and somewhat mellowed-out brand of punk music with ultra-sincere vocals. You might have called this "emo" 15 years ago. But given the unfortunate evolution of that particular term, I'd say "grown-up punk" is far more fitting. On the band's three contributions to this split, what struck me most were the lyrics (which are excellent) and the lead guitar work (also excellent). And the songwriting is definitely solid. I'm not much of an authority on modern-day post-hardcore, but State Drugs sound pretty good to my ears.

Both tracks on the Nato side of this split run well past four minutes - but that's hardly uncharted territory for the Blue Diamond boys. "Dangerous" is vintage fare for this group - a soulful, anthemic rocker with lyrics so epic that I just might say Nato has written his own "Born To Run". Check it out:

"Dangerous stakes and gambles/
If we leap we better never ever ever look down/
There’s no tomorrow in this apocalypse of hearts/
So darling … what do you wanna do now?"

All in all, "Dangerous" has the makings of a classic Nato Coles and the Blue Diamond Band number - powered by an impassioned vocal, Luke Lecheler's hot work on keyboards, and a knockout guitar solo from Sam Beers. And how often do you hear a nearly five-minute song that leaves you wishing it were longer?! "Midnight In Memphis" is not a Bette Midler cover but rather a Blue Diamond Band live favorite that has finally been committed to tape. Without a doubt, this is one of the best songs I've ever heard about the often lonely life of a touring musician. This one's a straight-up ballad. There's nothing fancy going on musically, allowing the song to be driven by Nato's words and voice. Here he really shines as a storyteller and poet, and it's damn near magical when he sings the lines "If I close my eyes/ I can hear the river washing them lonely souls down". A really well-done ballad is hard to pull off, but Nato and the boys may have reached an all-time high note with "Midnight In Memphis". Those lyrics are just magnificent, and this song absolutely transports me to the scene it depicts.

Even if Nato Coles and the Blue Diamond Band weren't already one of my favorite bands on Earth, "Dangerous" and "Midnight In Memphis" would have made me an instant fan. I figured the band's first new material since 2013 would be impressive, but this is beyond even what I was expecting. I am so stoked for the new album!