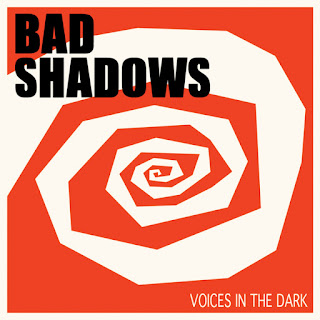 Concluding my series of reviews that are long overdue from 2018, we have the debut album from a band that I've actually written about before...kind of! Back in 2015, I reviewed the debut EP from a foursome out of Portland, Oregon called The Furies. The Furies, who had evolved out of The No Tomorrow Boys, have since morphed into Bad Shadows. And none of this is related to the Furies I reviewed yesterday. Confused yet? Voices In The Dark includes the songs from the first EP plus several new tracks. I love this band's sound and style, which is a perfect mashup of garage rock, power pop, surf, and late '50s/early '60s rock n' roll. Impressively, Bad Shadows are able to take all of this inspiration from mid 20th century music and still come out sounding like a fully contemporary band.

Hearing the newer songs along side the older ones, I can get some sense of the musical identity Bad Shadows have developed over the last couple of years. The title track and "Ghost" stack up nicely against just about any neo garage rock band you can name, except they lean more rock n' roll than psych. "I Believe" is in a similar vein but with more power pop influence coming through. "Tonight", with its jangly pop meets old school rock n' roll feel, epitomizes what Bad Shadows do so well. That surfy power pop vibe that was so palpable on the previous EP resurfaces on the wonderful "Beach", yet overall the tone of this album is a little different. The older songs fit in just fine ("Kim", an absolute pop gem, is more than worthy of another listen). But with a complete album to their name, Bad Shadows have fully solidified what they're all about. And what are they all about? Garage rock n' roll with the emphasis on rock n' roll, built on a foundation of timeless melody-driven songwriting. You could go broke trying to buy all of the 2018 albums I've recommended. But Voices In The Dark sure sounds to me like something a lot of you would totally dig. What a damn good year!

https://badshadows.bandcamp.com/album/voices-in-the-dark
Posted by Lord Rutledge at 7:26 AM