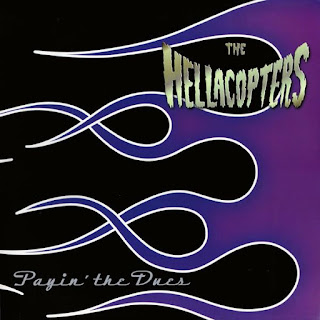 It was (almost) 20 years ago today; October 1 actually, that Sweden re-entered the mainstream as a musical force. It was around this same time that Sal from Electric Frankenstein coined the term "punk rock & roll" for a band that loved and was influenced by punk but also heavily influenced by early KISS, MC5, The Stooges, Radio Birdman, and Motörhead. No other band exemplifies this label more than The Hellacopters.

The seven-second opening sample to the first song on their first LP Suppershitty To the Max! sums it up best: "These are other kids, this is just an accident, just a couple of wild punks out rasin' hell". You are then hit with a sledgehammer of Humpers influenced onslaught on "(Gotta Get Some Action), Now!", and you realize these guys are no joke. Payin’ The Dues was released a year and four months after that (Swedish) Grammy winning debut. It has a much sharper focus, better production, better recording, and just more muscle than the wild recklessness of the debut. It also stretches out the Hellacopters' influences and shows more of what the band brings to the table. Their debut was recorded in 26 hours and is more of the Damned, Motörhead, punk influence. A year later, they were able to blend the punk and rock influences to create a perfect mix of what Sal describes as "punk rock & roll".

Opening with the tidal wave force of "You Are Nothin'", the album kicks off in the same way the debut did: loud, direct, and in your face. It is a similar experience to the first time you heard "Search & Destroy", "Kick Out The Jams", or "Overkill". It is a relentless two minute blast that chugs like a train. The twin guitar attack from Nicke Andersson (Entombed, Imperial State Electric) and Dregen (Backyard Babies, Michael Monroe Band) is a modern version of the bob and weave that was last and really only found with Wayne Kramer & Fred "Sonic" Smith. If the opening track was not enough to raise your blood pressure, then the brooding opening bass riff and wall of feedback of "Like No Other Man" are bound to do it. It carries the same thrust as Motörhead's "Bomber", but it is more in the red and more in your face and helps set the tone for most of the record in terms of how aggressive the performances are recorded. Track three is the best track that was never on a KISS record. "Looking at Me" has the riff, it has the groove, the solo, and all that it is missing is the make-up. It really is almost The Hellacopters taking the best parts of KISS's "All American Man" and making it their own. "Riot On The Rocks", "Hey", "Soulseller", "Where The Action Is", and "Twist Action" blaze through the next 13 minutes with Damned-like reckless abandon: nothing mid-tempo, all full speed ahead. These are the songs that make up not only the guts of the record, but these are the songs from the record that are perennial live staples and have been played at almost very concert since they were written. The album closes with "Colapso Nervioso" & "Psyched Out and Furious", two songs that are longer than anything else on the record and are more Sabbath meet MC5 than Damned meets Motörhead. It does provide the breather to give the rest of the record space to exist after being pounded relentlessly for 6-7 tracks prior. It is a similar palate cleanser that allows Payin' The Dues to breathe as the mid-tempo songs on Raw Power enhance the furious energy contained in the rest of the record. Going full bore on every song tires you out as a listener; you need something to let you get your bearings before diving back in.

Payin' The Dues was originally released on White Jazz in several pressings of both LP & CD. The label is still mysterious; I think it is the band's label with some friends, but they have put out several releases that are non-Hellacopters. All of their releases are great; take some time and explore White Jazz. In October 1999, Sub Pop released the US version with an extra disc/LP that was a live show from May of 1999 from Canada. The record was re-released this year for Record Store Day in Sweden and is very much in print on both vinyl and CD. The vinyl version of any pressing includes their cover of "City Slang" by Sonic's Rendezvous Band. Check out www.hotstuff.se for anything coming from Scandinavia. They are easy to deal with and very fair. Their website can be converted to English and US dollars.

One must remember, and it is a point that is hard to grasp, that in 1997 the internet was still in its very infancy. Amazon existed in concept, eBay was just getting started, they had no international presence, email with friends was just barely a thought, Google wouldn't even form for another year as a company, and Napster was still two years away from moving music you only heard about to it becoming something that was virtually tangible. Any band that was on a small label from another country may as well have been making music on the moon. It was years before the world shrunk and you could search and find what your collection has now become. Finding something like the Hellacopters was work and a labor of passion more than love. I found my copy in 1997 by a tip from a friend in Pennsylvania to call a store in L.A., talk to a French guy who owns the place, he was doing imports at the time, and he might have it. I called the number, and this very kind Parisian took my credit card info and said he'd ship it out. Six days later, a new music door swung open and it was not Sub Pop Rock City, it was Stockholm Rock City. And like the Gold Rush of 1849, I was out to use all my abilities and contacts to discover everything that Scandinavia was churning out. It is a journey I continue today.

https://www.facebook.com/thehellacopters/
Posted by Lord Rutledge at 8:18 AM