Devious Ones - Rust Is Imminent 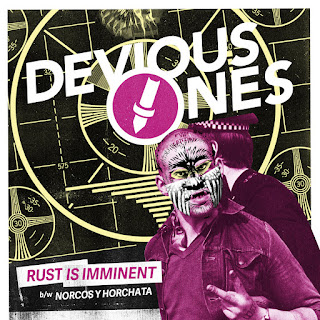 Devious Ones have been one of my favorite bands for a couple of years now, so naturally I was stoked to discover that they were giving us a preview of their forthcoming LP. This arrives in the form of a digital single for the album track "Rust Is Imminent". It has been released on Bandcamp in conjunction with the tour the band is finishing up right now. I have to say that "Rust Is Imminent" is the band's best song yet, and the opportunity to own it today in advance of the album release is totally worth the three bucks. Musically it's right in the Detroit foursome's wheelhouse of poppy old school punk, but with an anthemic quality that caused my pal Shawn Abnoxious to ask if Devious Ones might be an American Cock Sparrer. This is a true anthem for the Midwest - celebrating the values and unique character of its residents. There isn't a single line of the song that doesn't hit the mark, and in a perfect world this tune will ring out from stadium PAs from Cleveland to Minneapolis for decades to come. The second half of this digital single is exclusive to this release and features guitarist Amado stepping up to handle lead vocals. It's called "Norcos Y Horchata", and anyone who's ever had one of those days where everything just felt off from the start will be able to relate. "Feel like a toy store on December 24" is my new favorite lyric of 2017! And there's a killer little guitar solo that brings to mind all of those classic Buzzcocks 45s.

With their long-awaited debut album now recorded, Devious Ones are poised to take their place among the top tier of today's punk/powerpop bands. I have had the good fortune to hear a few of the LP tracks, and I must say the band has totally outdone itself. This thing is gonna knock your head off! In preparation for the album, download "Rust Is Imminent" and crank it loud (whether you live in the American Midwest or not)!