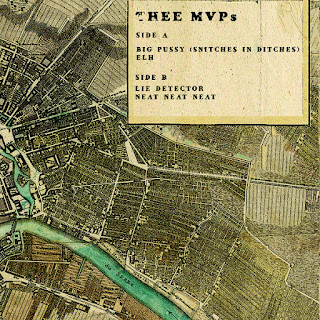 Having played a considerable part in the rise of the English garage scene in recent years, London's THEE MVPs seem poised for a major breakout. The band's new 7" on Bachelor Records is a perfect transitional record - featuring two formidable shots of loud indie-ish pop along with two covers that tip the cap to the band's straight-up garage/punk roots. It's hard to pinpoint exactly what kind of band THEE MVPs are at this point, and that's surely a good thing. Call "ELH" power pop, garage, alternative rock, Brit-pop, or just plain rock n' roll. Either way, it's an anthemic number with hooks for days and really heartfelt vocals/lyrics. It comes off like a modern update of '80s/'90s alt-rock, bringing to mind the heart-on-sleeve heroics of the Replacements, the crackling guitars of Dinosaur, Jr., and the timeless melodies of Guided By Voices. "Big Pussy (Snitches In Ditches)" shares similar pop sensibilities (I love that simple, sing-along chorus!) but with a decidedly post-punk/modern rock slant. I saw the title and hoped the song was about the Sopranos character. Of course it is! The two covers are The Damned's "Neat Neat Neat" and the Billy Childish banger "Lie Detector". The latter is 100% faithful to the original, while the former adds just enough of the band's own touch to be very worth your while. These two covers really tell you a lot about who THEE MVPS are. They may aspire to write great pop songs, but at heart they're still all about music that's direct, exciting, and a whole lot of fun to play. Fans of Royal Headache and Tenement take note. We just might be witnessing the ascension of our next great modern-day band!

Posted by Lord Rutledge at 8:50 AM