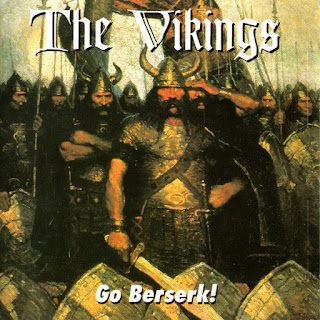 For my opinion, there is a big five of '90s garage rock & roll. Everything these five bands did and what they morphed into is necessary in every collection. They are The Devil Dogs, New Bomb Turks, The Humpers, Lazy Cowgirls, and The Dirtbombs. No five more perfect bands from that era have existed in similar friendly competition, each release more essential than the last. I will eventually focus on them. But as you know, all good things must come to an end. So I'm interested in focusing on their next big things.

Enter The Vikings, originally conceived as a two single side project that morphed into a more complete (albeit short) project with some of Norway's finest. When the Devil Dogs toured Norway in 1991, bass player Steve Baise met Morten Henriksen of the Yum Yums. Morten convinced Steve to come over and do some shows as a pickup band called the Devil Frogs. The band would do Devil Dogs songs and some choice covers. By 1993 Steve made a return trip, and Morten recruited two new members to the band to do five shows and record four songs. Those members were Happy Tom (Thomas Seltzer) on drums and an 18-year-old second guitar player named Euroboy (Knute Schreiner) - who of course went on to join Turbonegro a few years later. They cut the singles (one original & three covers) for two separate releases on Sympathy and Screaming Apple and changed their name to The Vikings. Released in 1994 to great reviews, the Vikings' "Rock All" & "Savage" singles were perhaps the warning signs that may have ended the Devil Dogs. By early 1995, the Devil Dogs had called it a day. Steve had eight songs (that would have been the next Devil Dogs record) and a budding relationship with a girl and new band in Norway. He took his songs and a bag full of covers to record what would become The Vikings' lone album Go Berserk.

Go Berserk is a flawless album. It is everything that is great about garage rock in general. A great formula to make a killer record is a balance of strong originals and a few covers (famous or obscure) peppered in. The trick is to interpret the covers in your style so that no matter how iconic the song, it becomes yours. Look at the early Stones, Beatles, Little Richard, Jerry Lee, Elvis (both of them), The Sonics, and Otis Redding. All were great writers and great interpreters. The Vikings followed that similar path of blending influences with originals; it gives you as a listener a spyglass look into the band's record collection and how they craft their songs and their sound. I'm a big fan of covers and how bands choose those covers, how they change or play them straight and how well they fit. As a side note, The Dirtbombs' Ultraglide In Black exemplifies this point. But that is another entry altogether.

Released in 1995, Go Berserk was a monster of record. The power of the band jumps off the record with the first track, "My Friend’s Little Sister". Clocking in at two minutes, it is the best song that the Devil Dogs never recorded. Big drums, crisp cutting distortion, and immediate vocals propel the record forward at a very live aggressive pace. Similar to the way the Devil Dogs made records, but this is different and not a copy of what they did. In hindsight, you can hear the power pop leanings of the Yum Yums and the best parts of what made Turbonegro great coming through in the performances - making this a unique entity unto itself. "Bad To Be Good", "Hard Knox High", "Strikeout King", "Summer of Hate", "Stop It", "(5-4-3-2) Baby You're The 1", and the debut single "Rock All" are everything that one would expect from Steve Baise as a songwriter. Catchy, fast, and big hooks that get stuck in your head. It takes great skill to write songs this good and this consistent.

The other story on this record is what is brought to the table by way of covers. None of the covers are big hits (with the exception of "Surrender" by Cheap Trick). I would say that they are more unique rather than completely obscure. An astute collector would know most if not all of the bands but not necessarily the song choices by those bands. "It's Cool To Rock" by the Accelerators is the one cover that could be mistaken for an original because they stay rather faithful to the original. There was no need to improve upon the original; it is just that good. "Let's Go" by Bay City Rollers is a WTF moment, but it works perfectly, played at triple speed of the original. It takes on a very Slade-like feel and removes all of the schmaltz you may be thinking it would contain. The back to back of "The Fly" by Chubby Checker and "Push & Stomp" by Joan Jett are rollicking versions of the originals, a double paring of songs about dancing that is a very nice touch. The record closes with a triple threat of goodness: "Surrender" followed by the Nervous Eaters' "Just Head" and closing with "Savage", one of the four lone songs by Australia's Fun Things. The opening verse says everything you need to know. "I am the rock & roll kamikaze, and you know that I'd die for you. When you're paying your bills to see me, I gotta do what you want me to." Pure rock & roll poetry and a perfect ending!

Go Berserk was released in 1995 on Sympathy on CD. The CD includes both the "Rock All" (also on Sympathy) and "Savage" (originally on Screaming Apple) singles. The record was released a year later on vinyl by Roto records out of Spain. In 2005, Just Add Water Records re-released Go Berserk as a double CD called Best Head Ever. It includes everything from the Sympathy release and four more songs from a 7" called High Time on Hit Me! out of Norway. It includes a very early version of "Good Head" - later made famous by Turbonegro. The two-CD set also includes a 12-song live record from Oslo. To the best of my knowledge, that is everything they recorded.

Though short lived, The Vikings are a crucial sign post of '90s garage rock. Even if the members never recorded another note, this still would rank as a masterpiece. It is surprising that more bands from both the states and Scandinavia didn't pick this up as a copycat project and do something similar in terms of sound and the blend of covers and originals. I implore you to track this down and make it one of your favorites; I assure you that you will not be disappointed in the least. You will only wish you could have discovered it to sooner to have the pleasure of enjoying it longer.

-Rob Sheley
Posted by Lord Rutledge at 8:21 AM