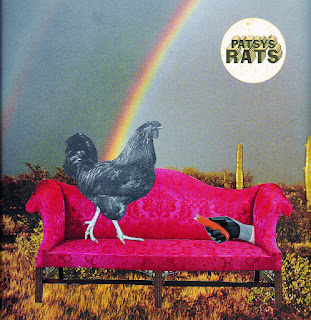 In the two years since I first raved Patsy's Rats, the Portland duo has released another EP and now three more singles. The band's newest single, "Roundin' Up", is the first 7" released by Dirtnap Records in three years. The title track, in my humble opinion, is the band's strongest since "Rock & Roll Friend" blew so many of our minds in 2015.

For this release, Patsy and Christian have enlisted Steve and Jon from Mope Grooves to play bass and drums. And the band sounds great! "Roundin' Up" is the perfect song for a 7" format. It's a total hit and definitely a track that will compel repeated spins. Style-wise, this one is right in Patsy's Rats' wheelhouse: punchy indie pop with Patsy's likeable vocals and some stellar lead guitar work really standing out. Be wary: this song is liable to get stuck in your head to the point where you may require medical attention. I can't stop playing it! If you can bring yourself to flip the record over, B-side "Little Rat Charm" is another ace tune. This song features Christian on lead vocals and starts out with a really mellow vibe to it. But stick with it, because that chorus is totally worth waiting for. What a hook! This is a little bit of a different sound for Patsy's Rats: like an updated version of '80s new wave pop. I had to double check to make sure it wasn't a cover of some obscure song from the soundtrack to a John Hughes movie!

Without a doubt, "Little Rat Charm" could have been an A-side in its own right. If Ken Dirtnap was going to get back into the 7" game, it seems appropriate that he waited for an opportunity to put out a single this good! No longer mere up-and-comers, Patsy's Rats are an absolute must-hear for anyone who's fond of well-crafted guitar pop. Bachelor Records will be releasing a singles collection later this year, and there's more new music on the horizon as well. For now, enjoy this terrific single - easily one of the year's best.