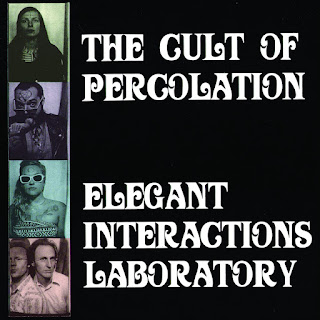 "When you listen to this, I love you. All these songs are about surviving. Maybe that's what makes them feminist; they're about being told you aren't worth anything, and then surviving. Or flourishing even. Or just killing everything that's ever hurt you. And rising from the blood-soaked earth. You're listening to an epic battle between me and all my demons, in whatever intergalactic forms they come in."
-Mary Allen

Sometimes artists can articulate the meaning of their craft so beautifully that I prefer to let them speak for themselves. The above quote from Mary Allen is all you really need to know about her band The Cult of Percolation. How can you read those words and not want to hear the music? I can tell you that I've never heard a band in my life that sounds quite like The Cult of Percolation - a Minneapolis outfit so "out there" that you just might believe this really is a soul band from another galaxy. Out on Piñata Records, TCOP's new album Elegant Interactions Laboratory finds Allen exorcising her demons in lockstep with a band that's dialed in to groove. Somehow this is an album that feels timeless and wildly experimental all at once. Allen is of course at the center of the action, but each player in the band proves to be essential. That rhythm section (comprised of Ian Stemper and Ike Hartis) is absolutely on-point, and there are a number of moments where organist Tanja Anđić or guitarist Eliot Gordon puts a crucial touch on a song. There's such a sense of adventure to this album that it's a little surprising to discover that most of the songs clock in right around the three minute mark. That groove has plenty of room to breathe, yet no song wears out its welcome. All of this works perfectly in support of Allen, who genuinely sounds like she has summoned her vocals from a place so deep down that it could very well be outside of this earth. At a purely visceral level, you could cue up any of these songs and just enjoy dancing to the music. At a deeper level, these are songs you can really immerse yourself in and fully experience. The intergalactic R & B of "Heavy" and stellar garage/soul of "A New Way" make a fine 1-2 punch off the bat, but this is an album that really hits its peak on the back stretch. "Lovin a Van" is the closest this record gets to "conventional" soul music, and it's positively electrifying. "Moon Girls" and "Love Drug" feature extraordinary vocal performances from Allen. Closing track "Indigo Children" incorporates influences that could be considered either psychedelic or interplanetary depending on your viewpoint. It puts a powerful exclamation on a powerful album.

No doubt Elegant Interactions Laboratory is a little different from the music I typically write about. And I must admit that I didn't quite know what to make of it the first time I heard it. Yet I'd be hard-pressed to think of another group that's more representative of the true essence of rock n' roll. And there's just no denying that Allen is a rare and formidable talent. The Cult of Percolation has traveled from light years away to deliver a message of love and hope to our planet. I'd say they've arrived just in time.